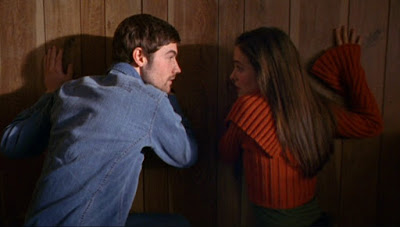 Jaye: What if we're too late? What if he's already beat her
to death with a bag of oranges for withholding trick money?
Eric: Well, if she had any trick money I don't think
she'd be living in a barrel. I know I wouldn't be.
Jaye: Yes, but maybe she's just a lazy whore. That happens,
right? They can't all have hearts of gold and good work ethics.

Bryan Fuller's Wonderfalls, one of the greatest television series ever put on screen -- and one of the greatest manhandled by its studio tragedies ever taken off that same screen after four episodes that were switched around on FOX's schedule with no notice (yes I am still bitter) -- premiered 15 years ago today. At least FOX was kind enough to release the thirteen finished episodes onto DVD (that doesn't really happen anymore, does it?) so we can cherish that perfect single season, again and again and again and again and on until the DVDs are worn down and we finally throw ourselves off of Niagara Falls in a barrel in despair...

I recently rewatched my DVDs of this most excellent series. Still holds up brilliantly- glad I'm not the only one who thinks so!

currently on episode 6 as I re-watch the whole series, which is still one of my favorites of Bryan's amazing creations, and another short-lived one (hey there Pushing Daisies).