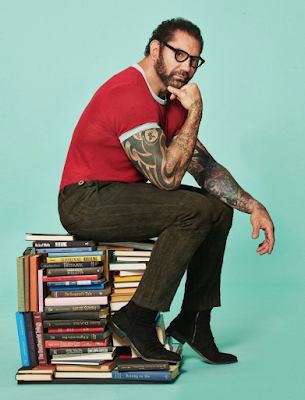 I was looking to illustrate this post with a real gratuitous shot of Dave Bautista and his gargantuan muscles - perhaps one of those speedo shots he's known so well for - but as soon as I stumbled upon the above, well, obviously I had to go with that. Beards and books and Bautista? I'm beside myself. Anyway we're here because Dave just got cast this week in Denis Villeneuve's reboot of Frank Herbert's Dune - yes the one that's going to star Timmy Chalamet as the Kwisatz Haderach himself Paul Atreides...
.

I was really hoping Timmy would feel more House Harkonnen than Atreides tonight, but maybe he's saving that for the Oscars pic.twitter.com/EbH1PgAUVX
— Jason Adams (@JAMNPP) January 7, 2019

.
Man I was proud of that nerd joke. Anyway there's no word on who Dave's playing but I imagine it's, you know, a character with muscles. Or perhaps he's going against type! He's already proven he can sit on a pile of books, so who knows? Also joining the cast this week, showing this thing's full-steam ahead at this point, is "Papa" Stellan Skarsgård as the greasy big bad Baron Harkonnen, so memorably rendered by Kenneth McMillan in David Lynch's original flop.

That's a big harness to fill but Stellan's a trooper, I have faith in him. And hell maybe they could reunite him on-screen with his real life son Alexander taking on the Sting role of the Baron's own bad boy Feyd-Rautha! I'd pay good money, great money, excellent money, to see Alex in that infamous metallic winged bikini...

I swear one of these days I will do a Dune post
without mentioning that outfit, but today is not that day. 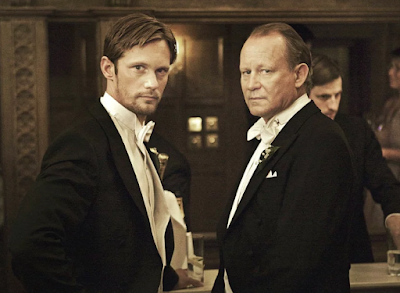 Thanks to Frank Herbert/Feyd Rautha we have not only Sting in a galactic Speedo, but also Matt Keeslar's ass in the 2000 TV miniseries, not to mention whatever Villeneuve comes up with.

I thought about including Matt Keeslar Butt in this post so good call, Anon -- I'm still angry at how far away they shot that, though

According to THR (https://www.hollywoodreporter.com/heat-vision/dave-bautista-joins-timothee-chalamet-denis-villeneuves-dune-1174273) Bautista will be Glossu "Beast" Rabban.