Harry: Now we don't know what lies ahead of us. The unknown has always been man's greatest demoralizer. Now maybe we can cope with this by maintaining our sense of values, by carrying out our daily routine, the same as we always have. Rick, for instance, and myself will shave every day... although in his case, maybe every other day. These concessions to civilization are important. They are our links to reality, and because of them we might be... less afraid.

They've been making movies about the end of the world for a very long time now, and Panic in the Year Zero is actually a pretty good one that you might want to look up if you've never - we mention it because it's the 112th anniversary of its star Ray Milland today but hell, every day's a new apocalypse, it helps to be prepared. Any Milland fans in the house? He worked for so so very long (almost sixty years) and made a ton of classics but it feels as if he isn't spoken of very much anymore. I always think of him when he was older, circa Dial M For Murder, but get a load at him in his younger days... 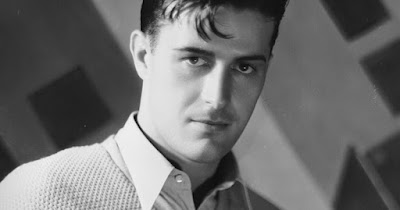 I'm a fan and it is a shame he isn't as well remembered as he should be. I think two things hurt him.

First he made a ton of garbage in his later years, I don't know if he just wanted to keep working or needed to but his willingness to appear in that onslaught of sludge (The Thing with Two Heads really scraps the bottom of the barrel) hurt his legacy. The other is that he aged quickly and badly more or less scuttling any sort of leading man assignments after his early 50's.

But he was very attractive, appealing and a very fine actor during those prime years.

Some of his better films include:

The Return of Sophie Lang-The spotlight is much more on Gertrude Michael than him but a decent film.

Wise Girl
Beau Geste-I'm not the biggest fan of this but I seem to be in the minority.

Skylark
The Lady Has Plans

Reap the Wild Wind-A florid over the top Cecil B. DeMille seafaring drama with John Wayne, Susan Hayward and Paulette Goddard alongside Ray. Milland blamed the process the studio used to curl his hair for this film with his loss of it. Whatever they used his hair started falling out immediately afterwards.

The Major and the Minor-Hilarious Billy Wilder comedy with Ginger Rogers masquerading as a 12 year old and Ray the major with poor eyesight she fools.

Ministry of Fear
The Lost Weekend-A searing look at alcoholism. His Oscar winner.

Kitty
The Big Clock
Alias Nick Beal
The Thief-Not a silent film but shot in such a way that there is no dialogue.

Let's Do It Again
Dial M for Murder
Three Brave Men
The River's Edge
X: The Man with X-Ray Eyes-No a great film but an interesting one. One of his final leads.

He also early in his Hollywood career appeared in two Dorothy Lamour sarong epics as a sort of himbo sex object for her-The Jungle Princess & Her Jungle Love. They are silly and ridiculous but mindless fun and Ray (and Dorothy) look great in them.

Thanks for that appreciation of Mr. Milland. Great round up of is filmes from the excellent to the ghastly, I was soo happy when recently Criterion put out The Uninvited which to me remains one of the best Hollywood Ghost Stories ever to come down the pike.