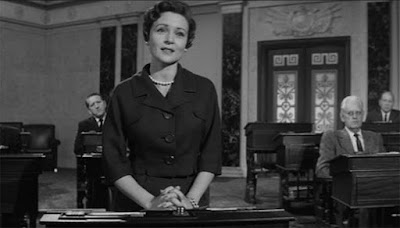 Fred Van Ackerman: Mr. President,
is the Senator calling me a liar?
Senator Bessie Adams: The record must stand as it is,
Mr. President. How the Senator interprets that
record is his own problem, not mine.

I have never seen Otto Preminger's Advise & Consent but glancing at its plot description on IMDb it feels pretty damn timely here today given our current political climate:

"Senate investigation into the President's newly nominated Secretary of State, gives light to a secret from the past, which may not only ruin the candidate, but the President's character as well."

Anyway politics and prescience aside this was the very first film that the legend Betty White, who is turning 97 golden years old today, ever acted in, although she'd done some TV before this... and, you know, she did some TV after this too. Some! I don't have any idea how large her role is then, not having seen it, but I'm sad out of the fifty names on the film's DVD cover they couldn't squeeze her in. Thanks goodness they found room for "George Grizzard" though... (that was sarcasm, what the fuck is a George Grizzard anyway)... (cut to someone yelling at me for my lack of George Grizzard knowledge)... Happy birthday, National Treasure Betty White! Here's to 97 more!

It's quite a movie. Charles Laughton kind of eats it whole - but there are several engaging things going on in it around the edges (and yep, I always think of Betty White in this, even though she's in a small part).

If you ever do watch it I'd be curious to read whatever you write about the gay storyline in it (it's a lot - so much early 1960s-era signaling/stereotyping in it). Of course while the story changed who did what, it was inspired by a real, sad event: https://www.senate.gov/artandhistory/history/minute/Senator_Lester_Hunts_Decision.htm

Of all the people to mention in a Betty White post... Not yelling... Most "Golden Girls" fans know George Grizzard from his 2 episodes as Rue McClanahan's dead husband George and the lookalike brother she falls for years later.

Re "Advise and Consent", Mr. Grizzard has a much larger and more important role in the story than Ms. White, so he belongs on that cover; if she'd been a bigger name her role would have been called a cameo.

You should definitely see the movie, which was decades ahead of its time, as many of Preminger's projects were. Its takes on homophobia, character smears, and playing political games with personal issues have made it pretty timeless. That it features Grizzard, Laughton, Walter Pidgeon and Will Geer, in a plot about gay panic (you really have to see its version of a 60s gay club), has made it a cult classic with gay men.

LOL I can't believe he was Blanche's husband, that is so funny! I started googling him but I wanted to wait and see if y'all actually did yell at me. I was sure there was a reason he was on the cover but a gay panic plot-line was NOT what I would've guessed. A&C is on my must-watch list now, thanks for info y'all. I HAVE THE BEST READERS.

In "Advise and Consent", Betty White is playing a character based on Margaret Chase Smith, a liberal Republican---remember those?---from Maine. She was one of the very few women in the Senate who wasn't the widow of a Senator in the years before Womens' Liberation.

Allen Drury, who won the Pulitzer for the original novel, was a right-winger who made the Joe McCarthy character in the book a far left liberal rather than a far right conservative. His political perspective is clear in his writing. The Good Guys are on the Right, the Bad Guys are on the Left.

"...Drury, a staunchly anti-Communist conservative of his time, regarded the [Brigham Anderson] character as sympathetic, not a villain. The senator's gay affair, he wrote, was 'purely personal and harmed no one else.'

There are several other intriguing comments about Drury's gay character in the Wikipedia article about him.

And from the NYT obituary: "He was an intensely private man, who never married, and lived quietly."

Someone should do a biography, but since most of the people who knew him are probably dead, I guess he'll stay in the closet forever.