The Killing of a Sacred Derp 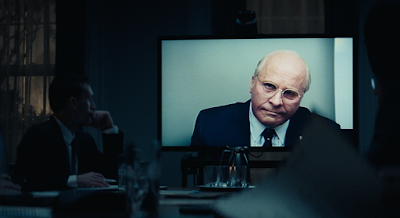 VicVice isn't so much shock and awe as it is a prolonged bout of enhanced interrogation - it's the scariest movie of the year next to Hereditary, but I'm not sure it means to be. I'm not sure what Vice means to be, in all honesty. I think it wants to be a comedy most of the time, although I only laughed once and I side-eyed every person in the theater who laughed more than that, making mental notes not to ever know those people. Vice is the rare comedy you walk out of with a mind to drown your neighbors in the theater's toilet afterward.

First and foremost it's true, Christian Bale's transformation into crux of evil Dick Cheney is a formidable one - the stiffness of his faux chin flab melts away pretty early on and the half-smirks have it; it being that nightmare fuel you remember so well from those Aughts years of political hell. It still burns and roils the belly, and Bale back-flips overtime to complicate a man who is in reality one of history's most pathetic one note villains.

But aye therein lay the rub, and the movie knows it's rubbed - why complicate uncomplicated shit-heels? Vice spends its entire runtime frantically searching for its reason - it dances wildly, gesticulating towards Cheney's "love for his girls" or his smirking manipulation of double-dumb Dubya; it's only purpose seems to be self-justification, when they really could've just said "we're making this movie cuz it might win us some awards" and been more honest. It's wrangling with these nasty folks remains facile, nothing but yellowcake smoke and mirrors. Its foundation's as shaky as the reasons we invaded Iraq.

As if anybody cares how Mary Cheney felt when her sister "betrayed" her? She signed her soul over to the family's ghoulish legacy with as much enthusiasm as any, and I remain unmoved no matter how adorable Allison Pill can't help but play her. I went in to Vice not sure why I was there and I left with even more questions, but mostly I felt ill from start to limping finish. What a waste of everybody's better energies. The struggle is elsewhere, fellas. 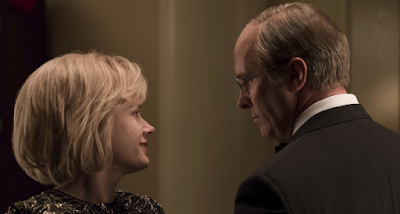 Ugh, that focus group coda scene in the credits... I can't believe we exist in a world where Adam McKay and Peter Farrelly are in line to get multiple Oscar nominations. We'd get fewer pandering crowd-pleasers if crowds weren't so easily pleased.

I couldn't disagree more. Of course we know how fucked the Bush admin was and so much behind it was the manipulating Dick Cheney. But we have a population that gets it's news and opinions from late not comics and comedy channels. I was enormously entertained by the movie, and laughed as much as anyone else, and if perhaps it was preaching to a certain choir, so be it,but maybe a few people got educated. I fucking hope it wins a ton of Oscars and Golden Globes too.

On the betrayal of Mary Cheney: I read that scene as Dick having to decide if Liz could betray her sister. She wants his approval to do so. And after all his protestations of support for Mary, he quietly nods his head, the last of any dignity he had now gone. Any values he had (if he had any at all) are destroyed as he throws his daughter under the political bus so her sister can be elected to Congress. Not even family has any meaning for him if it stands in the way of being elected.