I would actually love a sequel to Call Me by Your Name. In fact I am writing one.
— André Aciman (@aaciman) December 4, 2018

.
I'm not really surprised that James Ivory wasn't being quite factual when he dragged Andre Aciman into his feud with Luca Guadagnino last week, implying that he and Andre had a good laugh at Luca's expense about the idea of a CMBYN sequel. I wasn't surprised since I've read approximately ten thousand interviews with Andre, and seen him speak several times in person, and every single time he expressed some cautious but nonetheless delighted delight at the thought of diving back into Elio's story again. He was clearly smitten with Luca's film, and the whole experience (no doubt his boo sales had something to do with that) and I figured what he tweeted last night was the truth of the matter when I ever so gently tore into Ivory yesterday over his disdainful quotes. Anyway hooray, confirmation that Andre is working on the sequel! An excellent sign. 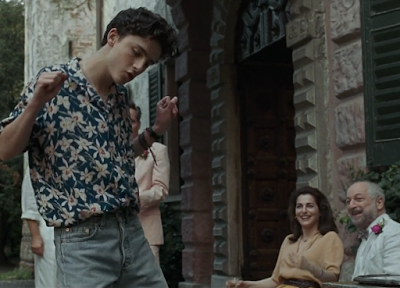 James Ivory really has worked up a right old huff about the lack of full frontal nudity, hasn’t he? Because I’m sure that’s what is still driving this. Also, I honestly think had Luca really wanted it, Armie and Timmy would have done it, clauses in contracts or not - and it would have thrown the balance of the film. As you say, no-one in their right mind would have said no to more nakedness or explicit sex in the film, because we are greedy like that. But it’s gentle sensuality is it’s charm. It got a gay love story into the mainstream, which is doing no harm to other films getting green lighted. Which actor was he grumping about the casting of to, Armie?
Anyway, wind your neck back in James, it was a nigh on perfect movie and if Luca thinks he can make a sequel, I’d trust him to do it. I just hope that if he does it, he and Aciman are going to veer slightly away from the original follow up ... because I am a romantic idiot!

Sarah, Armie specifically said he wouldn't do it because he was thinking of his children and their friends watching this movie when they're older and seeing their father's dick.

I think the motivation for Ivory's anger has little to do with the lack of frontal nudity and everything to do with the fact that he couldn't direct the film and that he and Luca had to do WGA arbitration about the writing credit.

I prefer holding the man -book/movie -or my beautiful laundrette or As Is overall the death in Venice/Maurice wanna be -cmbyn!!!!