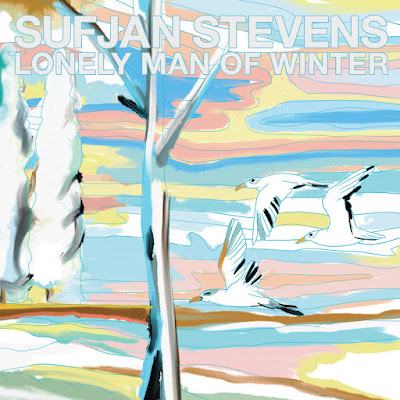 New music from Sufjan Stevens alert! Just in time for the holidays, aka the season when I listen to Sufjan the most thanks to his great big five-part boxed-set of holiday music (which PS just got issued in vinyl, in case you missed it), comes a track called "Lonely Man of Winter" which I am guessing will fit right in with all of the rest. But who knows! Not many people! The song has a roundabout history:

"In 2007, Sufjan Stevens wrote and recorded “Lonely Man of Winter” and, as part of a holiday marketing contest to promote Stevens’ Songs for Christmas boxset, traded ownership of the song to the winner, Alec Duffy. In turn Duffy gifted his song, “Every Day is Christmas,” to Stevens. But instead of widely releasing “Lonely Man of Winter,” Duffy held listening sessions in his home and around the world, sometimes pairing the private listenings with cookies and hot chocolate. In an end to that years-long project, Duffy – now founder/Artistic Director of the non-profit Brooklyn performance venue JACK – has decided to release the song “Lonely Man of Winter” on Asthmatic Kitty Records, digitally and on limited edition 7 inch, with funds going to support JACK’s mission of fueling experiments in art and activism."

Anyway the song isn't released until tomorrow -- you can head over to Asthmatic Kitty, aka Sufan's label, to pre-purchase the record, which also comes with a remix by Doveman. Now that's the spirit!
.

Wow to be that guy spraying sunscreen on Suf's back is literally my one true dream in life.