The Remains of the Gay 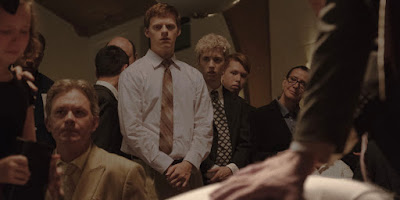 Boy Erased is a good film, and an important one, but I don't think I could call it a great one - for me it never truly transcends the constraints of The Message Movie template, right down to the list of statistics about so-called Conversion Therapy that hit right before the closing credits. But it tries hard, feels hard, and it cast itself a swell group of actors to make you care about characters whose motions you can see coming from a mile ahead. You care more than you would've in lesser hands anyway.

This will be a good movie to show my mother, and I have a feeling most of us will walk out of it with that same thought. I also think the film was probably made specifically for that purpose - it's not preaching to the gay ol' choir, it's preaching to the confused folks down on the pews. And it's better than The Miseducation of Cameron Post, since it at least has a dynamic lead character -- Chloe Moretz's work in Post remained murky, uncertain, but Lucas Hedges nails anything that's handed to him. Performance-wise I mean (don't read into that statement, ye of dirty minds) - the boy delivers. 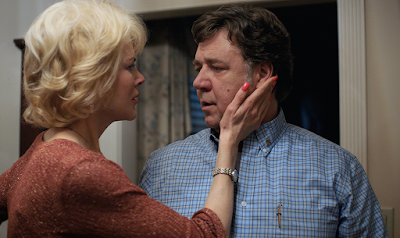 But even though we're with Jared (Hedges) the whole time it's Nicole Kidman and Russell Crowe's roles that ultimately matter most in Boy Erased - this is a movie that comes down to the parents, and their evolution. And that's not surprising since it was made by a parent, and I think that's the angle Edgerton saw the story from himself. This is a PFLAG mission statement movie. And that's not a bad thing! Our parents need their movies too, and Boy Erased is here for them. Kidman and Crowe both present skillful work, dissecting the evolution of folks who thought they'd already evolved just enough, thank you very much.

It's just that that structure - that the story depends on the realizations of supporting character forces, leaving our main character in a weird stasis for the majority... it's a weird and frustrating structure. Perhaps it echoes real life too closely? Perhaps it's just too frustrating for those of us who've been through the experience of other people's issues messing up our happiness, and I didn't especially feel like reliving it this week?

There certainly was catharsis in watching Jared tell his father it's his problem, as I sat in the audience thinking about how I've only spoken to my own father twice in as many years. It's possible some of this stuff just hits too close to home, and I don't really know what to do with it yet. I never got sent to conversion therapy but I spent my teenage years convinced of my own eternal damnation, whether Hell was a literal lake of fire or just the AIDS I'd deservedly get if I ever acted on my sinful thoughts. Those fears are gone, but the space they once carved out, wedging aside a healthy sense of self, won't ever be. It's hard to comprehend your own little erasure, I guess - your own vanishing point's too near for proper observation. Thanks Jason. Your review reflects the consensus among critics in the LGBT community that the film, though good, falls short of what it ought to have been. Nevertheless, I'm still looking forward to seeing it because of the excellent cast (especially Lucas Hedges who I believe is blossoming into a formidable talent), and because I want to support Joel Edgerton's good intentions in the face of persistent ignorance. I feel this will push the dial toward the production of more unapologetically gay-oriented cinema if it succeeds at the box-office if not with the critics. Marketability in the service of social evolution, so to speak.