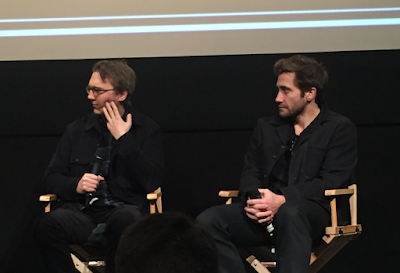 Really glad that I went to see Paul Dano's Wildlife with Jake Gyllenhaal and Carey Mulligan for a second time yesterday, and not just because Jake & Paul were there at IFC Center for a Q&A and I got to suck the same air into my lungs that had just been inside of Jake (I tried to think of a creepier way to put it but that about takes the cake) -- although I really loved the film the first time I saw it at NYFF (here's my review to prove that) I fell for it even more with a second look. What a stunning movie.

Sometimes in the middle of a film festival you're not sure if you're seeing things straight, since you're swimming up to your eyeballs in cinema and that can leave you a little dizzy - turns out I saw Wildlife just fine; in fact I might have underestimated just how good a director Paul Dano turned out to be on his first swing. The final scene in this film leaves me an absolute wreck - it's the best kind of tearjerker, the kind that really makes you work for it. Although I was younger than Wildlife's main character I still can see so much of myself during my parents crack-up in it - that need to keep a hold on something slipping through your fingers, even if you have to force everybody to pretend for a second. Devastating, moving stuff, and we should be looking forward to Dano's long career as a director.
.