NewFest Review: The Skin of the Teeth

Have you ever stopped and thought about the phrase "by the skin of my teeth" before? I have and without googling its etymology that's one weird fucking idiom, isn't it? It immediately brings to mind a close-up inside your own mouth, the place where your gums meet the white bone - it's unsettling and intimate, and wet. Now with googling the phrase I'll let you that it's a Biblical reference - it originated with the story of Job who it must be said is the poster boy for teeth and teeth alone.

None of that stuff I just shared with you feels at all out of left field once you sit down and watch Matthew Wollin's new film The Skin of the Teeth, a surreal and very strange police procedural about sex and race and rabbit masks. If David Lynch directed an episode of Law & Order: SVU you could imagine it turning out like The Skin of the Teeth, for sure. 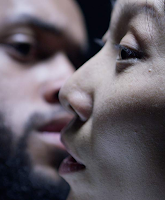 Josef (Pascal Arquimedes) shows up at the apartment of John (Donal Brophy) for a dinner date. It's revealed in short order that the two had just recently hooked up, and they apparently enjoyed it enough that they've decided to try actually getting to know each other as people, not just flesh. So dinner, and conversation then. And you know how it is - getting to know somebody can be weird! Conversation can take strange turns. One thing can lead to another and before you know it you're in your underwear in front of a floating party mask and the hose is turned on...

It's hard not to think of Get Out and Sorry To Bother You watching The Skin of the Teeth - films about Race gave taken a real dive off the existential deep end as of late, plunging us into the Kafkaesque head-space of worlds out of our control that make very little sense, and making sense in their not making sense. The Skin of the Teeth isn't quite as assured as those two were, and it might test your patience at times - its practical constraints sometimes feel more imposed than they do imposing - but it's also hypnotic and unsettling, very much so at times, and I dug the queer little spaces it burrows itself into. It's worth losing yourself in - you'll definitely find it keeps a little piece if you when you, if you, make it back.
.

.
The Skin of the Teeth is screening at NewFest tonight --
you can still get tickets! Check out NewFest's full line-up here.
.
Who? Jason Adams When? 12:01 PM
Labels: horror, NewFest, reviews