If you're doing a series on Movie Mustaches it's only inevitable that you'll get to Sam Elliott at some point - he's the Movie Mustache King, after all. Hell he might win an Oscar for Gruff Mustaching like nobody's ever gruff mustached before in A Star Is Born this year.

But if you're doing a series on Horror Movie Mustaches it gets a little more complicated, because Sam Elliott hasn't done a ton of Horror Movies. Correct me if I'm wrong but I think he's only done two. There's Frogs in 1972, in which he goes, blasphemy, mustache-less! And then six years later in 1978 he starred in The Legacy with Katharine Ross...

... which is the subject of today's post. Which is fine by me, even though I've never seen The Legacy (should I see The Legacy?), because this is the movie with Sam Eliott's bare-assed shower-scene in it, something we've never posted here on the site before, and I know you'll find this hard to believe but we're totally ready to seize our opportunity. Come with me and come with Sam after the jump for the rest of the immortal scene... 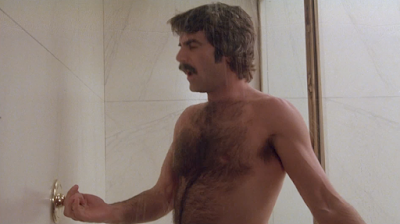 I'm not sure if it was a body double,Sam wasn't smooth like the guy in the bare butt scene.

So hot. I'd take him over any of those guys in the avengers.

It's actually a fun film that fell into that lot of a certain genre like the Sentinel and Burnt Offerings.

Peak Sam Elliott was super-hot! Although I agree with mrripley's comment that they must've used a body double for this scene, as it makes me wonder how a man with a hairy lower face and fully carpeted chest have such smooth legs?