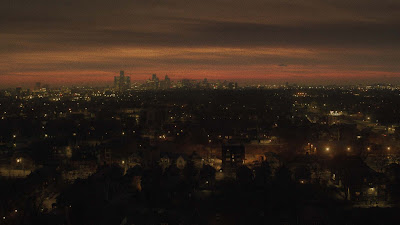 Reporting from the Brooklyn Horror Film Festival this week!


Setting your horror film in Detroit these days is a smart move, as that location location location will do half your heavy lifting. Just ask David Robert Mitchell's It Follows or Jim Jarmusch's Only Lovers Left Alive for proof of that. It's thick with the rot of urban decay, weeds ripping through concrete, that'll set your very soul on edge - the edges of Halloween's suburbia gone to seed.

First-time director Luke Jaden was clearly influenced by all of those films with Boo!, his feature debut, which tosses a partially religious family into the middle of that cement squalor on the night of All Hallows and forces them to fend for themselves as the curses descend - I thought especially of It Follows with its languid art-house pace and unseen menace; a pervasive strangeness that keeps you off balance.

These visions of Detroit seem stepped out of time - the neighbors are just as likely to be the rats of a vacant lot as they are actual human faces. The walls of these homes loom large, boxing them off like frontier-people among mountain wolves. Boo!, its exclamatory goof of a title aside, takes itself pretty serious, and I dug its four-tiered approach to dividing and conquering this fractured family on the verge - we get to know everybody individually, but most especially their weaknesses, before going in for the kill.

But the last act does feel a mite rushed - after all that slow build the center doesn't hold; it more explodes, and the threads don't quite pull together and wrap around our throat like they ought to; they more fray further apart. But Jaden's onto something here, visually, tonally - a good intent with the genre and a fine grasp on atmosphere - that shows real promise. 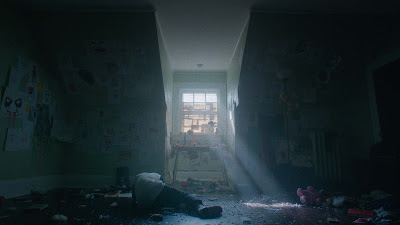