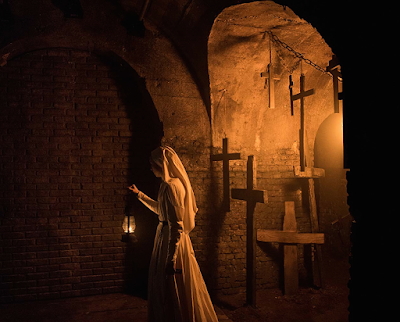 There's a shot in the first scene of The Nun that is I hope an explicit shout-out to that the greatest of all Nun Movies (Sound of Music be damned) Michael Powell's lusty sweaty Tibetan Mountain set Black Narcissus. The camera floats up above the head of a nun as she peers down down downward to a distant doom deep below her - the vertiginous pull of sin at the base of everybody turned cinematic. You can feel it yanking you in your seat. At that moment my spirits rose - if this movie's referencing Black Narcissus I'm in good hands!

Alas The Nun is no Black Narcissus. There are no lusty nuns here - Taissa Farmiga's leading lady Sister Irene hasn't taken her vows yet, but while she might shyly bat her eyelashes once or twice at Jonas Bloquet's studly French-Canadian tour-guide named Frenchie (who's channeling a bit of Joe Dallesandro's best dopey duh-faced peasant-underpanted appeal in Paul Morrissey's Frankenstein and Dracula films) you never get the sense that she'll be tearing loose any habits any time soon.

That's really the main problem with The Nun. For all its spattering blood and sometime viscera, for all the nameless nun bodies that are sent flying against stone walls, it's a religiously timid affair - nobody's soul ever feels at stake, especially those of us in the audience. A religious horror film needs to romance us with blasphemy - to show us dirty dirty things that corrupt and pollute, even if in the end it wants to stay on the side of the light. The Nun bangs and hoots at the doors of Hell but it never for a moment opens them up and lets the infection in.

Farmiga and Bloquet and Demián Bichir (as the head priest) are all wonderful and charming actors without parts much to play - stranded at the nunnery, stakes in hand, staring at shifting shadows. At a certain point the movie totally throws its arms in the air and decides to just become a string of senseless jump scares - I have nothing against a good jump scare, mind you, but shot to shot the logic of the scenes becomes erratic, unconnected to even themselves. And it's not a torturous dream logic, boxes within boxes, either - it's just a series of rooms leading in circles. (I will say they are gorgeous rooms though - this is a good-looking movie, bursting at its split seams with oodles of gothic flair.) 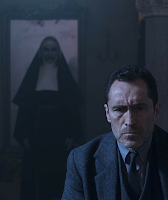 The Nun is the sort of movie you spend most of it lost in thoughts of what they could be doing better -- take Bichir's character for instance, who in the grand tradition of horror movie priests has the specters of lost souls haunting him. In this case its a little boy whose exorcism he mucked up - the little boy becomes a whirlwind of frog-hops and tongue laps by the final act, and all I could think was "What if this movie was the slightest bit daring? Really daring?" The Catholic Church has an awfully big pile of guilt to work through with regards to the relationships between priests and little boys, after all - imagine the horror movie that went there?
.
Who? Jason Adams When? 5:41 PM

"What if this movie was the slightest bit daring? Really daring?" The Catholic Church has an awfully big pile of guilt to work through with regards to the relationships between priests and little boys, after all - imagine the horror movie that went there?

...the fuck? You think this movie would've been better with a dose of pedophilia thrown into the mix? Chile...

Have you seen The Little Hours? Very interesting movie!

"You think this movie would've been better with a dose of pedophilia thrown into the mix?"

I don't know why I'm taking the bait since you seem deliberately obtuse but what I was saying was not that we needed explicit pedophilia, good grief -- what I was saying was that Horror Movies are at their best when they're channeling real world horrors and anxieties and this (the distrust we feel now when we see a priest and a child together) could have been tapped into in a metaphorical, but purposeful, way.