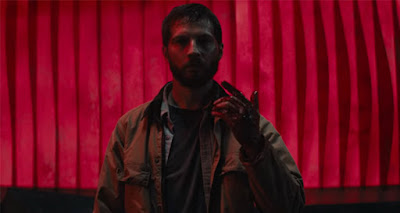 One of the best feelings you can have upon finishing a movie is the feeling of, "I wanna start that motherfucker right again right now!" And it's one of the hardest feelings to find, which makes it all the, what do the kids call it, sweeter. If you're lucky you'll feel it a few times a year - if you're really lucky, well, more than a few. We've been lucky this year. I had that feeling with a few titles off our list of 2018's best so far, and I had that feeling this weekend when I sat down and watched Upgrade... and then sat down and watched Upgrade a second time the very next day.
.

It wasn't supposed to be this way! I thought the film had a terribly goofy trailer, but upon watching the movie itself (a lesson I've learned too many times to keep forgetting - don't trust trailers) I get what the problem was - it's a goofy movie with a goofy ass idea and only by skipping on the exact right pattern of stones across the goofy ass precipice did writer-director Leigh Whannell manage to land this gangly beast on the right side of awesome. And that's a process you can't really transmit trailer-wise - you've gotta watch the whole step step step jump to get there.

And now I mourn not having seen this movie in the theater. This is a new action classic - truth, it's gonna stand the test of time and take its place deservedly alongside the 80s genre beasts it clearly holds in high esteem, great boot-scuffing shit like Robocop and The Running Man that've got a method to their mayhem. Upgrade has, in the wise words of Jerri Blank, something to say, and it carves its techno-babble doom-speak deep into your flesh. Run your finger along the wounds and really feel it.
.