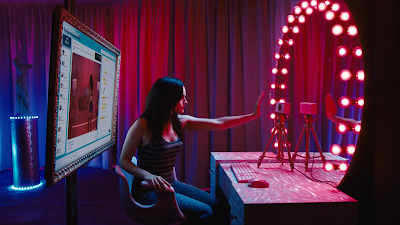 A little Lynch in the way that Denis Villenueve's Enemy was, Daniel Goldhaber's new film Cam - which premiered last week at the Fantasia Film Fest and won a couple of awards and was quickly snapped up by Netflix - tells the story of Alice and her cam-girl persona Lola, or is it the other way around, and what happens when one's online identity bleeds too much into one's life... or... is it the other way around?

It's like a sex-positive existential 21st century twist on Hitchcock's favorite story of Mistaken Identity; you could actually just throw a dozen Hitch titles in the blender (The Skin Game, Young and Innocent, Notorious, The Lady Vanishes), see what shakes out after a good and thorough shaking, and voila, there's Cam. Or go full The Woman Who Wooed Too Much if you're feeling real nutty (and lord knows I'm never above such dopy pun-based shenanigans).

Anyway the film's finest asset, besides some gorgeously rancid candy-colored cinematography, is its star Madeline Brewer, who any fan of The Handmaid's Tale will immediately recognize as the wild one-eyed Janine - Brewer shines on that show and she shines just as bright, with neon, here. Sometimes you cotton to an actor quick and I have cottoned to Brewer real quick - she feels dangerous in all the right ways, like our favorite new flavor of Juliette Lewis. She injects all the right juice into this our tale of woeful cyber self disintegration - she makes it not hard to feel her personhood fraying one pixel at a time, and still enjoy the freaky ride every step of the way.
.
Who? Jason Adams When? 6:03 PM
Labels: Fantasia Fest, horror, reviews