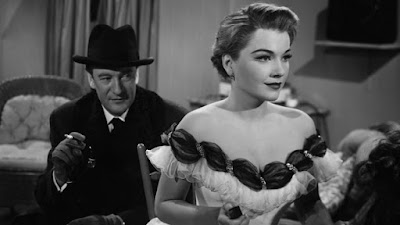 Addison DeWitt: We all come into this world with
our little egos equipped with individual horns.
If we don't blow them, who else will?

Such an amazing performance from a great and often underappreciated actor. The role at that point in his career was perfect casting and I can not envision anyone else winning in that category that year.

Since I've always been a fan of his of late I've been trying to watch as many of his films as I can get a hold of (he was quite prolific and his projects run the gamut from the highest A pictures to sludge) and in so doing I have discovered that he was very talented outside the confines of the acidic Addison DeWitt and when he was younger rather hot in a big beefy way.

His series of The Saint movies are very entertaining as are his few Falcon films. Just last week I caught Lancer Spy where he plays an undercover agent masquerading as a German officer while romancing Dolores Del Rio and with his high and tight haircut he looked so contemporary and perhaps the handsomest I've ever seen.

Also I've you've never seen Lured with Lucille Ball (as a dime a dance girl turned detective in London), Charles Coburn, Boris Karloff and he being directed by Douglas Sirk you really owe it to yourself to find a copy. It's wonderfully atmospheric and slightly weird.

rather hot in a big beefy way.

I don't know any of his other films, so I need to remedy that, but, in the professional world, you CAN learn a lot from this movie.

Also, it is absolutely one of the greatest.