Cracking Up at the Race Riots 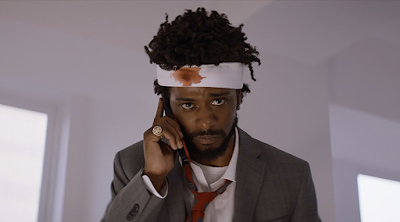 We live in insane times, and insane times call for insane movies. Look back at the trippy dark-hearted psychedelia of the 1970s - as the President used the Constitution for toilet paper in the real world directors like Alejandro Jodorowsky got everybody vibing on patriotic toads exploding in the mary-jane soaked cinemas. They lost their shit, and now it's our turn. The farting corpse of Harry Potter pointed the way, hallelujah, and now you can say hello to our horse-cocked overlords with Sorry To Bother You, a cinematic side-step into a new funkadelic netherworld -- out this weekend in a theater near you!

Lakeith Stanfield, a dulcet knot of extenuating circumstances, plays Cassius Green, a young man who works his way up from his uncle's garage to the warm-wooden-walled Starbucksian corporate offices of everybody's dreams with nothing but a sharp tight suit and a clearing of his throat - one quick choke and out comes his "white voice" (played by the never whiter David Cross) and tumbling after sparkling opportunity after sparking opportunity, best embodied by a coke-brained Armie Hammer in a sarong, because clearly.

Sorry to Bother You ping-pongs around its strange world, all the better to punch its walls out - expose itself. Take a good hard look, boys and girls and so on, it sure ain't shy. It goes from weird to what the fuck with a mad slapdash glint in its eye, slapping us silly and then sillier still. It's unforgettable, one of a kind, angry and giddy and hella goofy in equal measure. It is anything but a bother - it's a bolt of fucking lightning set to the smoothest of movie grooves. Put on your content sponsored earrings and get go.
.
Who? Jason Adams When? 12:54 PM

Ugh. Loved Stansfield so much in Short Term 12 and Get Out and then he has to go and do this and just ugh: https://hiphopdx.com/news/id.47435/title.lakeith-stanfield-apologizes-for-homophobic-rap-lyrics-on-instagram#

Yeah I'd seen that, agree it's gross but his explanation - that he was doing a character - seems reasonable enough for me to give him another chance. He apologized pretty thoroughly. I will have one eye open at all times though.