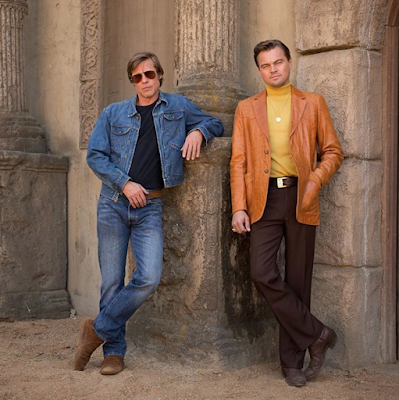 Brad Pitt's always felt like The Robert Redford Movie Star Modern Day Edition, so much so that they've acted in movies together and wink winked at us like, gotcha, so seeing Brad done up in Full Redford in this here the first picture of him and some dude named Leo in costume for Quentin Tarantino's Once Upon a Time in Hollywood, aka QT's Charlie Manson movie, makes sense. Here's what THR says about their characters:

"The two lead characters are Rick Dalton (DiCaprio), former star of a Western TV series, and his longtime stunt double Cliff Booth (Pitt). Both are struggling to make it in a Hollywood they don't recognize anymore. But Rick has a very famous next-door neighbor… Sharon Tate."


Sharon Tate is being played by Margot Robbie, and from there there's that cast of thousands. (And which got a sharp clap-back for being hella caucasian earlier this week, in case you missed it, and... yup. Good point.) Anyway because I'm bored I'll ask this... .

Brad looks like mark hamill in the night the lights went out in Georgia.

DiCaprio looks like he's wearing a costume, Brad is at home in those clothes.

So Tarantino decides to focus the Manson story on 2 fictional/peripheral characters and they're both men? What happened to the days of Kill Bill and Jackie Brown? I mean, I'm sure there will be some good supporting parts for women in this one, but why does it feel like so many male directors just get more and more focused on men and male ensembles as they get older?