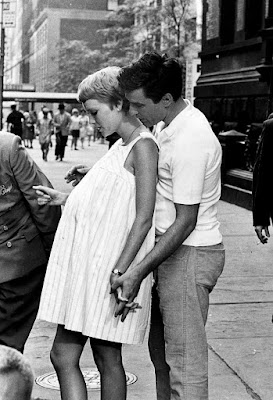 The film was an enormous success right out of the gate, tapping into an anxiety about modern womanhood and city living that I don't think they could even entirely see about themselves at the time - makes you wonder how people will look back on the shenanigans of Hereditary with its family curse in 50 years. (And yes people will be looking back on the shenanigans of Hereditary in 50 years.)

No matter how they looked at it at the time we look at it constantly now - Rosemary stands alongside Psycho and The Texas Chainsaw Massacre and The Exorcist as one of the most influential horror films of all time, and while I'm loathe to say it's even "more than that" - because being horror is enough, dammit! - Rosemary's reach really does extend beyond just its "tentpole of the genre" status because of all the innovations Roman Polanski baked into the thing. The innovative camera-work and framing...

... rewrote the way movies are shot, period. It's a perfect film, it's my favorite film, i've watched it more times than any other and yet I still find things I've never noticed before - I re-watched it over this past weekend and I was stuck for the first time by the dream sequence that Rosemary has while she's asleep in Dr. Hill's office waiting to be taken to the hospital (or so she thinks) where she dreams of her family, her parents and sisters and brothers, all doting on her newborn, and it's the saddest freaking thing I have ever seen. 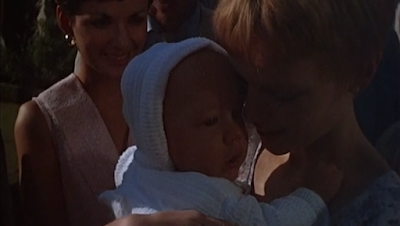 How have I always tuned out during this moment? It's brief and you're usually focused on what's about to happen - Dr. Hill's betrayal and the deep trauma that immediately follows. But the horror's made all the sharper by this sweet imaginary interlude. Poor Rosemary. 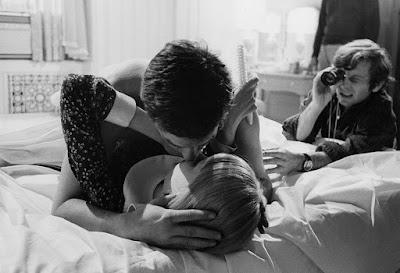 Another thing I didn't know - Time Magazine has a piece today on how the name of the infamous apartment building where all the horror unfolds was named after a famous figure in horror - click on over to read that. (thx Mac) My point is I still have so much to learn about this film even after all this time - I'm really looking forward to the forthcoming book called This Is No Dream: Making Rosemary's Baby that's out in July which will surely have even more wonders to share on this never not fascinating film. 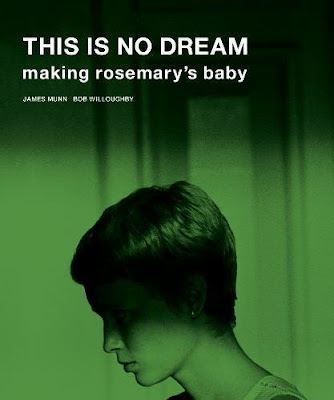 What are your favorite things about Rosemary?
.
Who? Jason Adams When? 11:04 AM

I saw this movie several times when I was younger. I'd read the book and I was really a fan of Mia Farrow from Peyton Place. I still like Farrow's acting, but I think she's completely nuts. Not only that, but it introduced me to Ruth Gordon and Patsy Kelly, as well as John Cassavetes. I knew who Maurice Evans was, from Bewitched, but I also learned about Sidney Blackmer's stage career after.

I hope you'll be doing something about Funny Girl in September. It's 50 years old as well. So is The Lion in Winter, Oliver, Rachel, Rachel and Zefferelli's Romeo and Juliet.

Love the camerawork throughout. Notice how the camera seemingly is released from a stationary shot and starts to float with her whenever Rosemary falls asleep? I don’t want to go along...!!!

I wonder how many times you've seen it vs CMBYN and how close the latter is to topping the former, so to speak?

The opening credits (music, colors and that FONT) are to die for.

I have followed your blog for as long as I can remember and I've got a feeling you would be really interested by the horror films currently being made here in Brasil.

The kind of horror you seem to appreciate I relate a lot with the work of Kleber Mendonça Filho, Marco Dutra, Juliana Rojas, Gabriela Amaral Almeida, Anita Rocha da Silveira and Petrus Cairiry - and since you and I share the appreciation of the same kind of man I strongly reccomend "O Rastro" and "Isolados", two films starred by some of the hottest stars we have (though the movies are not as good).

On the subject of motherly horror, there's the amazing "As Boas Maneiras" (Good Manners) in which a rich country girl is expecting a baby werewolf who she hopes to raise with the help of a poor black woman.

I say that based on the fact you seem so interested in foreing and original cinema and I think you would enjoy ours.

Oh, my name is Lucas, by the way. I am a film student currently developing a research about horror in the country. And your blog is both entertaining and inspiring :)

Lucas -- I have seen GOOD MANNERS, they did a screening here in NYC a few months ago, and I looooooved it. I guess I never reviewed it which is a shame - it screened at the same time I was super busy with the Tribeca Film Festival and I was too busy with that to write it up. But I really, really, really loved it. I'll try to see if I can find the other films you mention! Thanks for the heads-up, I am always looking for good horror :)

Oh, that's awesome, I would love to read your review of the movie :D