The Misandrists in 250 Words or Less 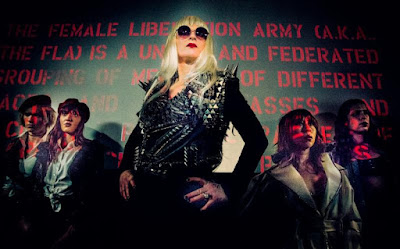 A good title for a review of Bruce La Bruce's new movie The Misandrists would definitely be "¡Vulva la Revolución!" -- and if anybody wants to steal that I offer it freely, in the spirit of the film's brutal anti-capitalist streak. So what do I say about The Misandrists? Have you seen a Bruce La Bruce movie before? Not the last one of his that I reviewed here, the one called Gerontophilia, though - that one sticks out among his work like Mysterious Skin sort of sticks out among Gregg Araki's work, in that those ones managed to twist their makers revolutionary weirdness into more mainstream packaging for a hot minute. 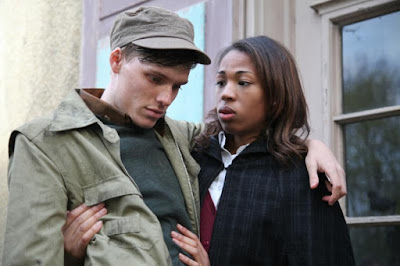 Araki was back to his old tricks soon enough with the likes of Kaboom and here The Misandrists feels like vintage Bruce La Bruce again, mixing up pornography and violence with art-school screeching - I say "screeching" with love in my heart, I truly do. Who else would make a movie about a cult of lesbian terrorists posing as a Catholic School reformatory, splicing actual footage of gender reassignment surgery in between gauzily shot pillow fight trysts? The world is richer and stranger with Bruce making these things in it - cherish every frame or, to borrow a phrase from the Pope of Filth himself, go fuck yourself.
.
.
The Misandrists is opening here in NYC this weekend and you can actually see Bruce and some of the film's cast for a Q&A at a couple of screenings... which as a concept is hysterically funny once you've seen the film's fourth-wall-busting final scene; believe you me. I can only imagine that experience. Go do it and report back to me...
.
Who? Jason Adams When? 2:29 PM 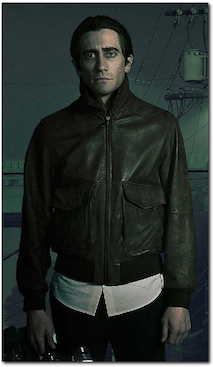 "If not my favorite of that year - and it may be - it's at a minimum in the top 3 or so. And Jake should absolutely have been up for the Oscar that year, and maybe won (although I'd have been good with Keaton). While it has a look or style that relates to an older Los Angeles, the heart of it is as timely as can be, sadly."

--- For its 5th anniversary I gave some love to Dan Gilroy's film Nightcrawler for besides being awesome also seeing our awful present in advance, and here reader Scott agrees.
. 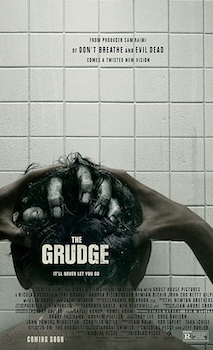