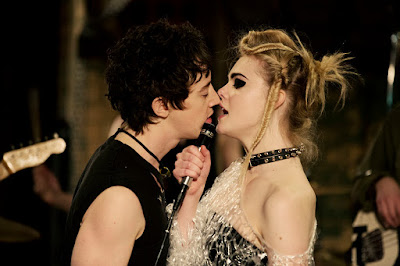 Have you ever seen an episode of The Monkees? I'm trusting some of my audience here to be of an age where they have seen an episode of The Monkees - it was my mother's favorite show when I was little (it was airing on reruns, I am not quite that old) - but I'm sure that John Cameron Mitchell, who just turned 55, has seen the show, was probably raised with it. Now imagine that The Monkees had been set a decade or so after it was set - 1977, the year I was born, the year Never Mind the Bollocks was born -  would Davey Jones have pierced a nipple on stage? Might Peter Tork have vomited on his keyboard?

Who knows, but that's kind of what John Cameron Mitchell has imagined with How to Talk To Girls at Parties, his hellaciously goofy new flick starring Tony winner Alex Sharp as Enn (short for Henry, natch), who you guessed it goes to some parties and with his best mates John (Ethan Lawrence) and Vic (the dreamily Billy-Idol'd up Abraham Lewis) learns the language of talking to girls there, and other places. Only they're not... quite girls? We kind of figure that out quick when they answer the door in rubber jumpsuits - it takes the boys, distracted as boys will be, a little bit longer.

Turns out they're aliens, six strange tribes who've banded together to survive space and time inside an endless cycle of creation and destruction and seeing the sights. Or something such - there are mystical gems and sex-swings and high-ponies and artfully baby-pinned shredded-tees, there are mad-cap romps through the streets of Croyden shot like snappy Super-8 stills in fast succession - it's like A Hard Day's Night starring The Clash with Nicole Kidman occasionally screaming "Abortions!" - what's not to love?

I guess a lot? This movie's gotten hella mixed reviews since premiering at Cannes last year, but I personally found it too sincere and sweet-hearted about its vomit-kisses and shit-tomatoes to pass up. It doesn't concern itself with labels - it's a sci-fi musical sex dramedy about an alien invasion inside the British Punk Scene for god's sake; like piercing your tongue it's hard to pin down. Just let the goofiness wash over you and you'll have a good time.
.
.

Is it a gender-reversed Earth Girls are Easy?

I thought of Earth Girls Are Easy several times. (That's basically a yes.)

you know the monkees didn't write their own songs...or play their own instruments.