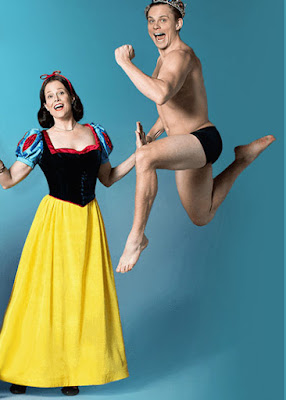 I'm still so mad at myself that I didn't go see the play Vanya and Sonia and Masha and Spike when it was playing here in New York and starring Sigourney Weaver and Billy Magnussen looking like this - what an American Tragedy. Me not going to that play should be the next season of American Crime Story. Anyway I was reminded of this with today's news that Billy has landed the lead role on Kevin Williamson's new anthology series called Tell Me a Story, which doesn't quite have Sigourney wearing Snow White's Costume but is spinning off fairy tales in modern ways. Says BD:

"The first season of the anthology series, which takes the world’s most beloved fairy tales and reimagines them as a dark and twisted psychological thriller, will interweave “The Three Little Pigs”, “Little Red Riding Hood”, and “Jack and the Beanstalk” into a subversive tale of love, loss, greed, revenge and murder.
Magnussen will play Nick, a young high school teacher who’s handsome, seductive, and quite possibly a wolf in sheep’s clothing. After a wild night with a girl he met at a nightclub results in a hookup but no phone numbers swapped, he thinks his chances with her have gone out the window. But when he runs into her again, he’s sure to take advantage of his second chance, proving he’s sensitive, understanding… and, quite possibly, too good to be true."


(thanks Mac) How strange and specific that Billy's cornered the niche of injecting his patented brand of pure sex into Fairy Tales - you might recall that he also played the character of "Rapunzel's Prince" in the Into the Woods movie...

I guess there's just something about him that
makes us feel like innocent blushing little virgins again...
.
Who? Jason Adams When? 5:59 PM

If Marvel finally remakes Fantastic Four, he'd be perfect as the Human Torch