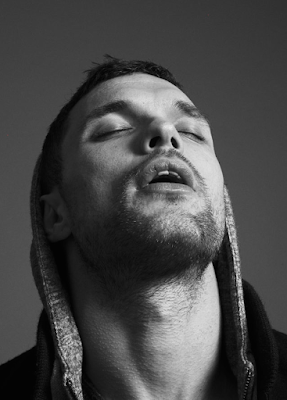 I've posted that picture of Ed Skrein before (in one of our multiple gratuitous posts on the actor) but I'm really feeling that picture today and I don't think you'll mind a redux. Hi, Ed! Good to see you, Ed! Real happy to hear about your next project - Ed is going to co-star with Eva Green and Kathy Bates, a dream-team if ever one was assembled, in a science-fiction thriller titled A Patriot, directed by Dan Pringle. Here's the jist:

“A Patriot” takes place in a future authoritarian state that has walled itself away from a world ravaged by climate chaos and resource wars. The story follows the unquestioning Border Corp Captain — played by Green — as she fights to defend the purity of the population, until a chance discovery makes her doubt the authorities she has pledged her allegiance and life to protect."

You're going to have to excuse me for a minute
This picture of Riz Ahmed & Ed Skrein has winded me pic.twitter.com/RSohBSDHqd
— Jason Adams (@JAMNPP) April 27, 2018