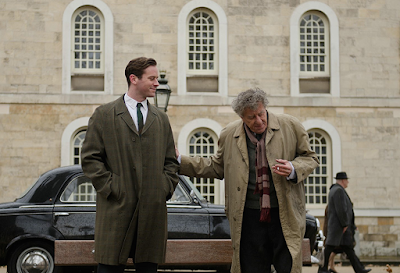 Artist biopics usually work a bit of a thematic rut - they show the Mad Genius, unencumbered by society's restraints, sleeping with multiple people and doing the hot drugs of the day, burning bright and fast and mean and so on. You know that story. These movies don't often have much interest in the actual minutia of creating - day to day, minute to minute, the struggle with carving something beautiful out of thin air and some mud maybe.

That's what makes Final Portrait, Stanely Tucci's new film on painter and sculptor Alberto Giacometti (played by a constantly distracted Geoffrey Rush), so refreshing - Giacometti had a lot of those old asshole qualities; yes he's a cad to his wife, flaunting an affair with his muse left and right. But mostly he's just an old man walking into the office every day, sitting down, and trying to get some damn work done. 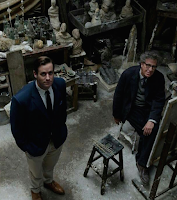 Final Portrait revels in the mundaneness of creation - the practicality of sticking one's hands in clay, wrapping one's hand around a brush, mixing paint, and scratching everything out and starting over again. (Especially that last part.) Of whittling something awful down into something that is not quite so awful. It's terribly undramatic, and I mean that as the highest compliment. It's not the way these stories are usually over-told to us, and in its under-telling I was absolutely captivated.

Would I have been less captivated if the subject of Alberto's brush had been someone other than Armie Hammer? Who's to tell, and better yet I don't have to tell, because it is Armie Hammer after all. Armie plays James Lord, also a real-life person, a gay (yes that again, good for Armie) writer who traveled around getting his portrait done by all the Mid-century artists who mattered. Besides a couple of books on Giacometti James Lord also wrote one about Picasso, and he was also drawn and photographed by Balthus, Jean Cocteau, Henri Cartier-Bresson, and Lucien Freud, among many others. (I recommend his book Plausible Portraits, which shows all of these portraits through the years alongside his reminiscences and thoughts on the works.)

So Final Portrait isn't a barn-burner - we don't see the artist tormented and falling apart, besides by some of the same indecision and self-doubt that any artist knows only too well. But in its ordinariness, in its bemused honesty about the very real business of having the nerve to plunk one's self down and think anybody cares enough to eventually look and then making something from start to finish, it's better than what we're used to.

It tries to show us how to be capable. How to survive as an artist, as a life-long goal, as a living, and not as a psychosis. How to survive these terrible creative impulses of ours somewhat intact. You can see what the appeal would be to that for a journeyman turned name like Stanley Tucci. He gets it across.
.
.

Final Portrait opens in New York and LA this weekend.
.
Who? Jason Adams When? 12:50 PM

I watched the clip and I finally discovered why Armie Hammer seems so familiar: his voice is very much like John Hamm's.

Armie was excellent in this. A subtle, understated performance. Plus, he’s beautiful in the clipped hair and suits and ties of the era. (I know it’s a sacrilege, but he may be more beautiful here than in CMBYN. Too bad the character is completely sexless.) Unfortunately, Geoffrey Rush gives another one of his hambone performances. Awards-bait biopic acting is as stylized and unreal as Kabuki.