Chris Hemsworth grew a mustache & now a fire-truck has to follow him because everyone who sees him bursts into sex flames (aka the flames of sex) pic.twitter.com/e3g8iGNZoK
— Jason Adams (@JAMNPP) March 12, 2018

.
When pictures of Chris Hemsworth with his brand new handlebar mustache popped up on the internet yesterday, right after I dumped a bottle of water over my head I asked myself what role might this sex-stache be for? Well now we know - Chris posted a video of The Stache-ening...
.


.
... on his Instagram and there alongside (once your eyesight returned) he said the stache is for his upcoming movie called Bad Times at the El Royale, which was written and is being directed by his ol' Cabin in the Woods pal Drew Goddard. Goddard is a name that should be familiar to y'all round these parts and not just for Cabin - he's an acolyte o' Joss Whedon and worked on a bunch of those TV shows including some of the best episodes of Late Buffy. As of late Goddard had been trying to get a bunch of Spider-man spin-offs made for awhile, and also worked on Daredevil and The Defenders. 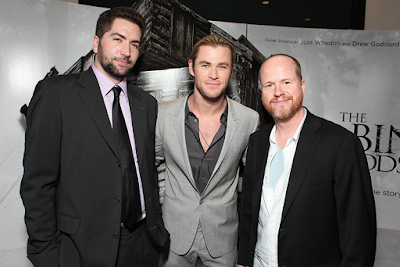 (And oh yes he is freakishly tall.) Anyway I hadn't heard hide nor tail of El Royale until Chris mentioned it - turns out it also stars Jon Hamm, Dakota Johnson, and Jeff Bridges, and according to IMDB "is set in the 1960s in a dilapidated hotel in the Lake Tahoe region in California." Sign me up!
.
Who? Jason Adams When? 10:42 AM