I feel as if I am doing this incredible opening sequence from last week's episode of The Assassination of Gianni Versace a disservice by not including Laura Branigan's song "Self Control" which plays over top of it, so here, just turn this on and stare at those gifs:
.


.
I know from scanning Twitter that reactions to this show have been all over the map - a lot of people think it's slow and are irritated that we don't see more of the titular designer - but you can count me among the folks who are finding this run of episodes extraordinary, just mind-blowingly good. I was skeptical at first about Criss and the show having a hollow heart at its center with his Cunanan creation but the longer it goes on the more brave it all seems to me - this show's delving into some very dark places about the American Gay Experience... 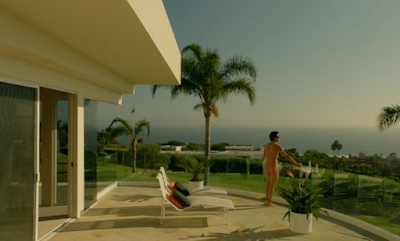 ... of the past thirty years and is refusing to lionize us or our choices; it's as if, in the wake of AIDS, this rupture was born; Andrew Cunanan is the BOB of this world, spilling out and spreading sociopathic poison over all these broken and weak people who were primed for this exploitation by decades, lifetimes, of defeat. It is asking us what we really want; what matters in the face of absolute oblivion. This is dark stuff! I get it. Dark stuff that is painted like a perfume commercial or a GQ shoot from 1988. It is, in other words, perfect. Anyway let me know how you're feeling, and hit the jump for more naked Darren Criss since that's the real draw...

is this the first time FX has allowed penis on air? crazy.

Haven't seen the program but in these gifs it seems something of an homage to American Psycho.

“of the past thirty years and is refusing to lionize us or our choices; it's as if, in the wake of AIDS, this rupture was born; Andrew Cunanan is the BOB of this world, spilling out and spreading sociopathic poison over all these broken and weak people...”

That was a brilliant metaphor. I love me a Twin Peaks reference!

That is so funny you compared Cunanan to BOB, because I 100% felt like ep 4 was basically Ryan Murphy's take on TP: Fire Walk With Me, with Cody Fern/David Madison in the Laura Palmer role.

I'm liking the show even if it is very, very dark and think Criss portrait is spot on. He's not obviously crazy in the moment though looking at it now it's obvious he was a tightly wound lunatic just waiting to that trigger to go off.

It would be nice to see more of Edgar Ramirez and Penelope Cruz but since the story isn't really about them other than peripherally we have to bide our time and take what's given until their story moves to the forefront.

Yeah, this season is dark is hell, but I think it's pretty great. When it's over, I want to rewatch it back in chronological order though, because sometimes the backwards structure confuses me - although not in a bad way AT ALL. I just sort of lose track of where we are, even with the episode-opening title cards of how long before the murders.

If nothing else, the soundtrack is PERFECTION.