Call Me By Your Phantom Boyhood 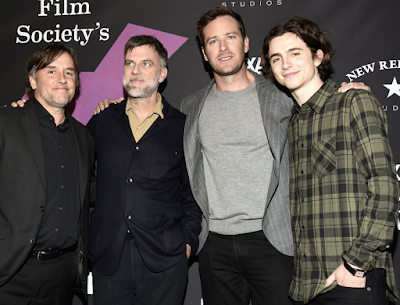 You might've seen me joke on Twitter about how the press released for this was suggestively worded but Armie Hammer was honored by the the Texas Film Awards in Austin yesterday and his good pal Timothée Chalamet showed up to do the honoring, and also Richard Linklater & Paul Thomas Anderson were there too? I don't know and since I didn't did to go I don't want to look up the specifics - all we need to know is that picture happened and it makes me smile. IndieWire talked to Armie right over here - the choicest bit is about the Call Me By Your Name sequel (any interview any of these people give until this happens this will always be the choicest bit):


André Aciman is doing a reading here in NYC tonight and I plan on going - I have my copy of the book for him to sign! - and hopefully he'll give good quote about the sequel too, stay tuned for that. Anyway don't forget - Call Me By Your Name hits blu-ray on Tuesday! You'll know it's out because you'll never hear from me ever again. 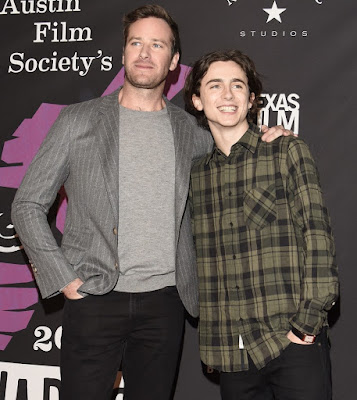 My attitude to the sequel is complicated. I think Luca, his actors, and André Aciman are artists who’ve made a work that I found profoundly affecting. They deserve both good will and the benefit of the doubt. On the other hand, I’m not expecting them to make what I would want: something moving and erotic and artistic and very, very gay. Aciman is straight-identified, for one, and I believe him when he says that Oliver and Elio were just a product of the imagination or, at most, a take-off on his nonsexual crush as a 9-year-old on an older boy. And Luca himself may be gay but in an Italian and European way, outside the expectations of Anglo-American gay culture. He’s already said that Elio and Marzia will have a love relationship, but he’s also said that Elio will be watching the first French AIDS film: both ideas are not what I would put in MY sequel, but I’m glad he said those things—it’s actually quite brave that he’s so open—because they tell me to have few or no expectations. If I see the sequel as a completely new beast, the first film will be unharmed in my mind by whatever it turns out to be.

I have no complicated feelings about the sequel whatsoever. I'm just here to brag that I wet to NYU with the Indiewire journalist who interviewed Armie.

So, I may be opening a can of worms here, but hypothetically speaking, if there are going to be sequels, would you want to see these two characters end up together in the end? Go their separate ways? Something more ambiguous?

I tend to view CMBYN as a sort of fantasy (albeit one that depicts honest emotions) and I feel like there's such a dearth of quality, happy, gay romances out there that I'm in favor of some kind of happy ending. But I could certainly be persuaded otherwise.

I'll admit it. I want the happy ending. I want to be sophisticated and worldly and accept the premise that the love affair with Oliver was a fundamental foundation of Elio's wholeness, essential to becoming the wise, rueful man we see in the book's concluding chapter, but something that exists perfectly in the past, best left there. But I can't. Why should I, when even Elio can't let go of it, twenty years on!? So he's since had others who have reduced Oliver to a footnote? Bullshit, Elio! Look what you've done Andre Aciman! I can't remember when I've gotten so wound up about fictional personages. Anyway, the problem for me here is that any truly satisfying sequel would necessarily entail a deviation from the text. I'd find a by the-book-script to be a depressing letdown. Would Aciman forbid the alteration of his conclusion and consider any changes to be a dilution of his novel's beautiful melancholia, a pandering to fans of treacly romance? Or would he consider a screenplay a different entity, infinitely malleable? Or does he even have any say in the matter? Like a previous poster, I want something moving, erotic, artistic and very very gay. Luca! Get those two back together again!