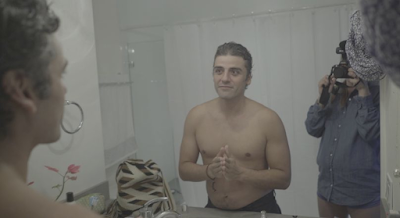 If you actually read the interview with Oscar Isaac in GQ last week - and didn't just stare dumbly at the lovely photo-shoot attached to it, I mean - then you learned a couple of things about Oscar. One: you learned that he got married and had a kid last year, and if you'd like to hear his wife Elvira Lind's side of that you can click here; she's a documentary filmmaker and apparently shot a doc about their crazy year that she says she might never release. The above picture is from it (so, uhh, I sure do hope she releases it).

The other thing I learned from Oscar's GQ profile is that they live in Brooklyn, which came in as handy knowledge when I needed to confirm a rather odd star-sighting my boyfriend had just yesterday...
.

Boyfriend just called me to let me know that Oscar Isaac just jogged past him wearing jeans. Like... full on exercise jogging. Wearing jeans. So if you're in Greenpoint keep your eyes peeled for a small sweaty man!
— Jason Adams (@JAMNPP) February 27, 2018

1. An Oscar sighting is better than a Angel sighting. Your bf has been blessed!
2. Oscar and I are the same height and I don't consider myself small! Just not tall. ;)
3. Oscar's dad bod gives me the vapors.