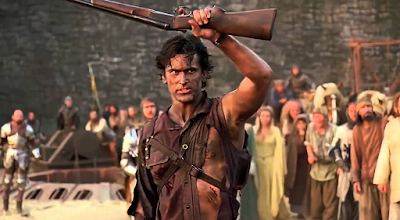 AsAsh: Alright you Primitive Screwheads, listen up! You see this? This... is my BOOMSTICK! The twelve-gauge double-barreled Remington. S-Mart's top of the line. You can find this in the sporting goods department. That's right, this sweet baby was made in Grand Rapids, Michigan. Retails for about a hundred and nine, ninety five. It's got a walnut stock, cobalt blue steel, and a hair trigger. That's right. Shop smart. Shop S-Mart. You got that?

Army of Darkness came out on this day 25 years ago! I didn't latch onto the Evil Dead train until several years later when I was in college - hard to believe now given how soulless and cynical I am but once upon a time I was a wilting flower when it came to Scary Things; thanks to my religious upbringing I wasn't allowed to watch anything that would've fallen under the category of "Truly Fucked Up" and truth be told even once I was able to I didn't even want to.

I spent my first couple of years of college being one of those "Gore is pointless; give me atmosphere and tension over that garbage any day!" folks. And then at some point in short order I saw The Texas Chain Saw Massacre (which I know technically doesn't show anything, but it remains the Gateway Drug all the same) and the Evil Dead movies (and probably Peter Jackson's Dead Alive around the same time) and that was that was that. I weep for all the lost years I could've been collecting Fangoria now. 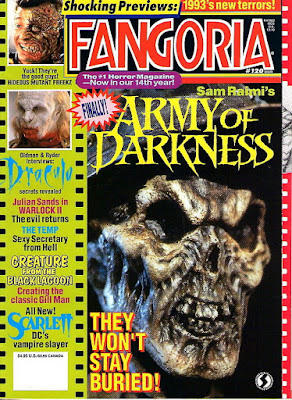