This isn't a Call Me By Your Name subject deserving of its own entire lengthy post since it's already been mentioned here and there by folks previously - how the flouncy face-threaded shirt that Elio wears in the final scenes of the movie is an echo of the flouncy flowery shirt that his father coerces him to wears earlier in the film, and how his seeming surrender unto the world of flouncy shirts symbolizes without underlining it his growing acceptance of his own gayness (the flower shirt was given to him by his parents gay friends, Isaac & Mounir, whom he'd be chastised for thoughtlessly ridiculing previously. "Is it because they're gay or because they're ridiculous?")

There was a dumb piece I read last week that got on my nerves (I'm not even going to link to it) that was about how CMBYN got "1980s Gayness" completely wrong, according to them anyway, because Elio & Oliver didn't dress like Boy George -- they apparently completely missed the point of the preppy fashions, and how this through-line to Elio's little transformation at the end with his eye-liner and fluffy hair, was making a statement about self-acceptance and expression, but whatever, I'm so used to bad dumb takes on CMBYN at this point. But it did make me want to ask this though: 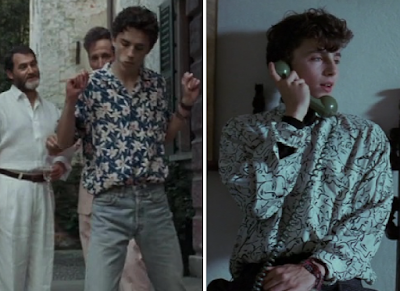 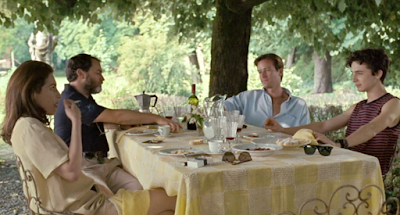 And yeah okay fine as long as we're here I do have a couple more thoughts tangentially related to this storyline. I always have more! And it's this: I find Oliver's behavior when Isaac & Mounir come to visit really interesting. Remember this is the day that he's delivered Elio the happy "See you at Midnight" news. And yet Oliver books it out of there for the entire day. Why does he leave? Well the last time we see him is when he finds out that Isaac & Mounir (or "Sonny & Cher" as they're nicknamed) are coming over for dinner.

Sidenote: If you focus on Michael Stuhlbarg during this scene you see something we don't see from him anywhere else in the movie - he is pissed off. He glares at Elio, chides him (the first of two times) for using the derogatory nickname, and storms off. Isaac & Mounir are the only proper Gay Couple that we see in the film, and I think it's fascinating to watch the way they disrupt the narrative. 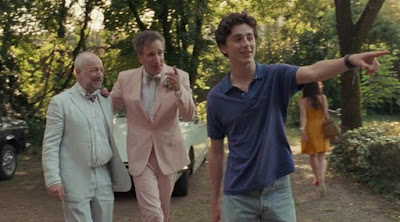 In the book the Perlmans have tons of guests coming and going but we see very few of them in the film, and I think it's vital, both that Guadagnino chose these two as the ones we see (they weren't characters in the book) and from there to see how all of the character's reactions to these specific two play out. Elio's Father doesn't want them being made fun of. As I've said before I'm not convinced that his speech at the end has anything to do with his own unexplored sexuality, but he's clearly peeved at the sexuality of older gentlemen being mocked. Annella is, as usual, more relaxed about all this - Elio says "Sonny and Cher" is actually what she calls them. One assumes, since there doesn't seem to be a mean bone in Annella's body, that there's a story behind this - we can also see that her husband is touchy about it too, though.

And then, to get back to my main point, there's Oliver. No matter what Oliver's plans might have already been for the day - he did already put Elio off until midnight, after all - the way this plays out on screen is that Oliver rushes out of there the minute he finds out there are Openly Gay Men headed to the house, and he doesn't come back until late, avoiding Isaac & Mounir altogether.

This is not surprising! Oliver, firmly ensconced in his closet, is probably somewhat terrified of gay men who are not in the closet. There were (and remain to this day, although obviously in altered forms) entire hierarchies and structured behaviors that had and have to do with gay men's levels of comfort towards Explicit Gayness, and CMBYN is smart enough to show that in action. Elio's ease with Isaac & Mounir, even if he did have some issues to work through, shows him heading towards a healthier acceptance of his own queerness, as opposed to Oliver's complete avoidance. That is to say, Elio will wear the flouncy shirt and he will like it, dammit.

Labels: Armie Hammer, Call Me By Your Name, Luca Guadagnino, Timothée Chalamet, Which Is Hotter?

As someone that would have been the same age as Elio at that time, I wouldn't declare they hit any fashion milestones of the time. I also, didn't live in a small Italian village, either. However, Oliver should have brought the Yuppie ideal with him based on the character's background. Oliver's wardrobe should have consisted mostly of Izod and Benetton. T-shirts were fairly blousy then, too. And if he was going to wear button down shirts, they should have been Oxford style.
I remember embarrassing myself with a red, zippered parachute jacket at that time. While in Paris, 1985, I bought the most Euro trash jacket you can imagine. It was a double-breasted zippered jacket with puffy sleeves. I remember a girl friend of mine always wanted to borrow. I'm sure I looked like Rusty from European Vacation when they go clothes shopping. Elio's final scene is the closest your going to get to that period.

But my understanding is that they actually used 80s clothes, that the costume designer raided her husband's wardrobe from the period for Oliver. IDK, I just appreciate the continuing analysis of CMBYN. This movie reveals itself on repeated viewings and for me is a rare pleasure in that way.

I think the argument that Elio and his father have about the flowery shirt at the shirt rack—really much more playful than an argument—is some of the best acting that Michael Stuhlbarg does in the film. It remains kind and teasing but somehow morally serious and, when Elio comes out in the flowery shirt for Isaac and Mounir, I thought, “How much he loves his father.” Of course, all the other subtexts about self-acceptance and sexuality, which you so carefully explicate, are also there.

A sidenote about the issue of the father’s sexuality. Here’s a passage from Aciman’s novel after the father’s great monologue in which Elio speculates about it: “We said good night. On my way upstairs I vowed to ask him about his life. We’d all heard about his women when he was young, but I’d never even had an inkling of anything else. Was my father someone else? And if he was someone else, who was I?”

This is by far my favorite post on CMBYN. I don’t think we see eye to eye on CMBYN, because even though I truly loved it, I’ve seen it 4 times already, I have a few problems with the way Guadagnino shoot their bodies and the sex. But It’s not as simple as those posts about “The film were coy about sex” “They played safe”..made it look.
I don’t agree with those either, but specially after reading the screenplay and knowing the novel, I like to think that Aciman – who writes about exile and its consequences – are writing about how Elio sees and misses Oliver’s body as if it was a homeland for a exiled person.
So I think the movie turned out great but it could’ve been more if they hadn’t changed so much from de shooting version of the screenplay.
But that isnot what this post is about, lol, what I wanted to say is that I haven’t thought about how Oliver avoid the gay couple at all. Great point.

I agree wholeheartedly with @walter neto'regarding the perceptiveness of your post on the subject of Oliver's aversion of Sonny and Cher. I hadn't made sense of Oliver's desertion after breakfast, his notice to Mafalda, and his pivot upon seeing the couple by the piano. I misread it as more mundane plot points, or perhaps Oliver signaling "it's time." Now, I view it as the shame of the closet. Even with a wildly loving and accepting Perlman family and friends, Oliver flinched.

There is so much still to be discovered in additional viewings of this movie (as @Sherri Priestman notes above) and to consider on your very thought-provoking blog. Thank you.

P.S. The clothing in the final scene is spot-on New Romantic.

P.P.S. On the subject of Professor Perlman's speech at the end (and @Owen Walter's comment), I found it interesting how Luca took the "does Mom know" comment in a different direction from the book. In the book Annella is overtly less clued in than in the movie, and Elio asks "does mother know" in reference to Oliver. In the movie, she absolutely knows about Elio and Oliver. (That scene in the car, on the return from the station, is phenomenal.) Instead, the film's "does Mom know" means "does she know about you [Professor Perlman]". Consistent with the book, I read that scene in the film to mean that Professor Perlman loved a man. And I think the film version of Annella knew that too! As played by Amira Casar, Annella sees everything. I love how Luca has her invite Chiara and Marzia over for dinner after the bus stop scene -- let the women of the men who love men commiserate. Not that I think her marriage was a sham, but I thought it was a sly point made by Luca.

@Jack Really good point with the three women at the bus stop!
I even had the impression that Annella feels that her husband gets reminded of his own experiences with a man through Oliver and Elio and that he relives its joys and pains. You can see both emotions on his face when Annella suggests the trip to Bergamo.
In the scene where Mr. Pearlman and Oliver in look through the pictures of the statues Mr. Pearlman giggles like a young boy and later, talking about the sensuality of the make bodies his words and face give away some sort of secret longing (after Oliver - or another man Oliver reminds him of?).

so not me but my mother lived in a small northen italian village and her friend is from where its set, and it got all of the fashion right, maybe the shirts would be a dif pattern but thw gist of it was exactly right