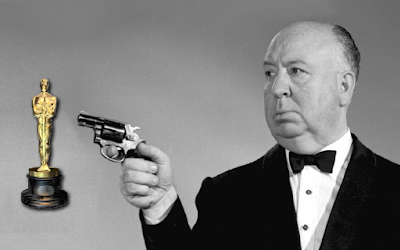 The Oscars are a smidge over a month away and whenever I think about the Oscars I think about the fact that Alfred Hitchcock never won one. (Don't feed me that Honorary bullshit line either, I won't have it.) That said I'd never really thought about all the times that Hitch was nominated before, so I decided to give that a look today - he was nominated five times in his 50+ year career making movies. They all fell in a 20 year span, from 1941 through 1961. The five films he was nominated for are... 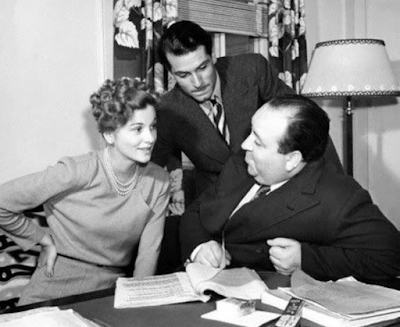 Rebecca - Rebecca was Hitch's first movie in the U.S. and he was welcomed with pretty open arms (as open as the Academy would ever get for him, anyway),  the film garnering a total of ELEVEN nominations at the 1941 ceremony.  (And his film Foreign Correspondent was also nominated for Best Picture that year.) Rebecca was nominated for Best Director, Actor, Actress, Supporting Actress, Score, Screenplay, Art Design, Editing and Special Effects, as well as the two statues it won for Best Picture and Best Cinematography.
.
.
Hitchcock lost his statue to John Ford, who was picking up his second trophy, this one for The Grapes of Wrath. His other competition: Sam Wood for Kitty Foyle, George Cukor for The Philadelphia Story, and William Wyler for The Letter. 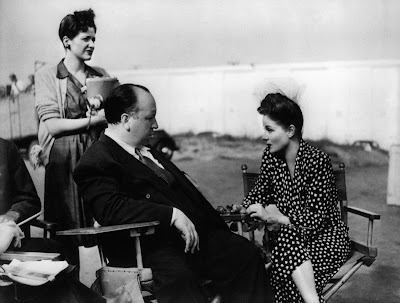 Lifeboat - Hitch was nominated just four years later in 1945 for his WWII experiment all set in the confines of the titular water-craft. I mean, the wrangling of Tallulah Bankhead alone! Lifeboat was nominated for two statues besides Hitch's Best Director nod, for Screenplay and Cinematography, and it lost everything. 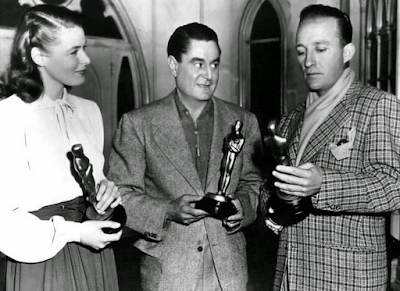 Hitch lost to Leo McCarey for the Bing Crosby priest-drama Going My Way - like with Ford this was McCarey's second statue, having previously won for The Awful Truth in 1937.  (Sidenote: The Awful Truth is marvelous.) Also up for Best Director this year - Billy Wilder for Double Indemnity, Otto Preminger for Laura, and Henry King for the presidential bio-pic Wilson. 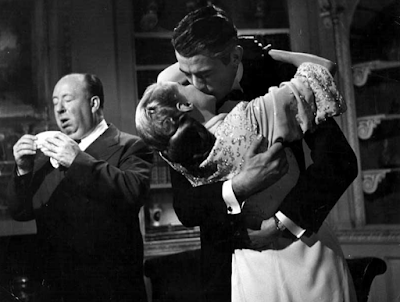 Spellbound - Hitch was nominated again the very next year for this (tepid, if you ask me) psychological thriller starring Ingrid Bergman and Gregory Peck. (Fun Fact: Spellbound was filmed in my hometown of Rochester, New York, because Bergman lived there for awhile and loved the city.) Spellbound somehow managed to get six nominations total, including nods for Best Picture (howww), Best Supporting Actor, Cinematography and Special Effects (which it definitely earned with its Salvador Dali sequence), and winning one for Best Score.

Hitch lost to Billy Wilder (for The Lost Weekend) this year - this was Billy's first statue but he'd go on to win a couple more after this. (Don't worry, we're getting to that!) Also up for Best Director were Clarence Brown for National Velvet, Leo McCarey again for The Bells of St. Mary's, and surprising me Jean Renoir for his cotton farmer story The Southerner - this was the only nomination the great Renoir ever got! (That's one more than I thought he did, though.) 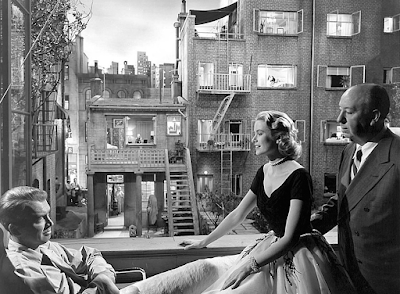 Rear Window - Now this is more like it. After losing in 1946 it took Hitch another nine years to get his fourth nomination in 1955 - even though in the interim he made classics like Notorious, Rope, Strangers on a Train, and Dial M For Murder - but there was no denying a feat like Rear Window, which did great box office and got stellar reviews at the time (Hitch usually got one or the other). Of course the film only got four nominations (unlike the ALL THE NOMINATIONS it should have gotten), winning a big fat ZIP - it also lost Best Sound, Screenplay, and Cinematography.
.
.
It was Elia Kazan who snatched Hitch's statue away this year for the statue-hogging juggernaut of On the Waterfront - Kazan had already won a Best Director statue in 1948 for the movie Gentlemen's Agreement, but the Academy really really loved On the Waterfront, giving it 8 statues out of 12 nominations. As seen in the video above the award was handed out by both Marlon Brando and Rear Window's Thelma Ritter, so I guess the Academy was hedging its bets. Also up for the Director prize that year - William A. Wellman for The High and the Mighty, Billy Wilder for Sabrina, and George Seaton who directed Rear Window's leading lady Grace Kelly to her Oscar win that year in The Country Girl. 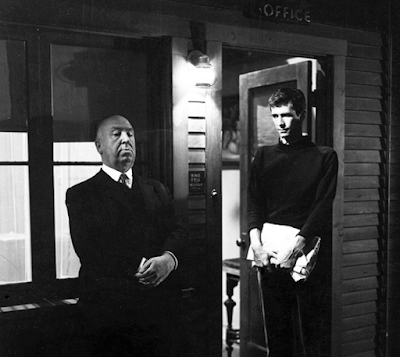 Psycho - This entire post was inspired by Rolling Stone's article this week looking at all of the times that Horror Movies have gotten Oscar nominations, which remains few and far between even with this year's Get Out tally - I didn't even realize until reading it therein that Hitch had gotten nominated for his lo-fi 1960 shower-stall shriek of a film. But he was, alongside Janet leigh in Best Actress and nods for its Cinematography (somebody should look up how many Hitchcock Films got Cinematography nominations) as well as Art Direction. Again he lost them all. 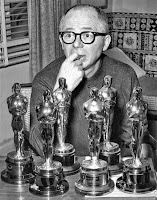 Best Director went instead (again) to Billy Wilder, this time for The Apartment -- Wilder even won another Oscar this same year for the movie's Screenplay. Listen. I can't knock The Apartment - it's this week's banner and one of my favorite movies. But for fuck's sake, Academy. You were just being mean to Hitch at this point. The Apartment won 5 gold-men total out of 10 nominations at the 1961 ceremony. That's year's other Director losers included Jack Cardiff for Sons and Lovers, Fred Zinnemann for The Sundowners, and Jules Dassin for Never on Sunday. (Just be happy to be there, fellas.)

After Psycho the cinema of Alfred Hitchcock only managed one more Oscar nomination, a nod for the Special Effects of The Birds in 1964... which it lost to Cleopatra. (Ugh can you imagine?) Nothing for Marnie, nothing for Topaz or Torn Curtain, nothing for Frenzy, and nothing for Family Plot. Granted these aren't Hitch's greatest moments, those were behind him, but some of the best people continued working with him so you'd think he'd have gotten some below-the-line nominations. Zilch, though.
.
.
It was in 1968, between Topaz and Torn Curtain, that the Academy doled out his Irving G. Thalberg Memorial Award, which he infamously accepted as seen above, with just a simple, "Thank you... very much indeed." It took him longer to walk to the podium than it took for his speech. Hitchcock was turning 70 that year and in a dark place - his films weren't doing great, either critically or commercially, and he couldn't get movie stars anymore either. He'd had an awful time with Paul Newman on Torn Curtain, and whatever awfulness had happened with Tippi Hedren on Marnie was poison. 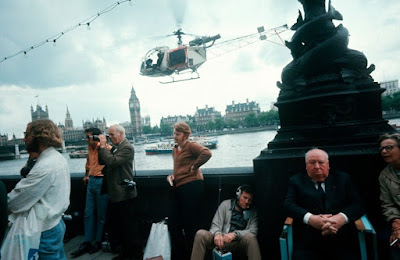 In 1972 he left Hollywood altogether and went back to the UK and made Frenzy, which is a bit of a return to form but is also, it must be said, a mean-spirited and ugly movie. He was bitter and it showed. Family Plot came in 1976 and is certainly a funnier, less nasty film - perhaps coming back to California agreed with him - and not a bad note for him to end his career on. He kept working up through the end, trying to get a spy thriller called The Short Night made with his North by Northwest screenwriter Ernest Lehman. (The screenplay for that has been published, by the way, although I've never read it. Saving it for a rainy week!)
.
.
Anyway Hitch did manage to scrounge up some end-of-career awards - besides that Thalberg he also got an AFI Lifetime Achievement Award in 1979 (see above) and he was knighted three months before he died in 1980. He was too sick at that point to fly back to London for the ceremony - he had kidney disease - so a ceremony happened in Los Angeles instead. Hitch died on April 29th of 1980 in his home in Bel Air - he was cremated, and his ashes were scattered over the Pacific Ocean. 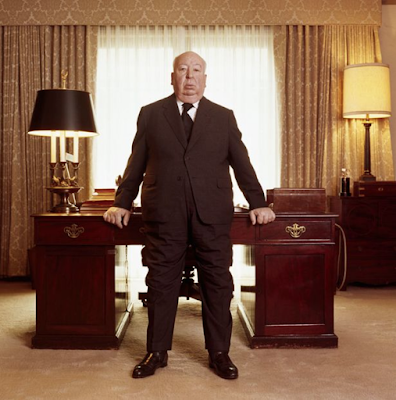 Argh!! What a choice to be faced with! My head says Rear Window but my heart goes with Lifeboat, which are similar movies in their theme of managing in confined spaces, and that's what I voted for. Plus as I suspected before I voted Rear Window is doing just fine without my vote. Ideally he should have won for both but I think Rear Window is the one where most people feel he was robbed.

In regards to Lifeboat how Tallulah missed out on a nomination for Best Actress is beyond me. She's both brilliant and a whole lot of fun.

Great write up, Jason. Not that it matters, but Leigh was best supporting. I'll forgive you, though, b/c you brought that pic of Nick Jonas in leather pants to my attention the other day, and it's made me week a lot brighter (new wallpaper alert!).

I've got nothing to add. Just thank you for another terrific piece.