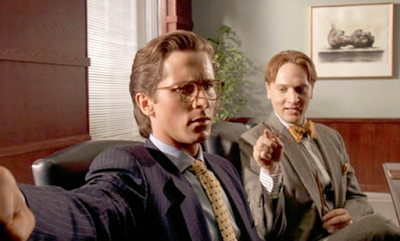 Patrick: Come on, Bryce. There are a lot more
important problems than Sri Lanka to worry about.
Timothy: Like what?
Patrick: Well, we have to end apartheid for one. And slow
down the nuclear arms race, stop terrorism and world hunger.
We have to provide food and shelter for the homeless,
and oppose racial discrimination and promote civil rights,
while also promoting equal rights for women. We have
to encourage a return to traditional moral values.
Most importantly, we have to promote general
social concern and less materialism in young people.
Luis: [feigning tears] Patrick. How thought-provoking.

Thing I learned crafting this tweet - Mary Harron is not a lesbian? Here I have thought she was a lesbian all this time
— Jason Adams (@JAMNPP) December 30, 2017

.
I was seriously surprised to read that Harron is married (to a man) and has two daughters. I have no idea why I thought she was gay in the first place, but thinking of American Psycho as having been reimagined from a gay man's perspective (Bret Easton Ellis) to a lesbian's was part and parcel of how I had been reading the film all these years - I had been placing a sort of an ironic detachment onto its worship of the male form...

... (I mean I can't mention "the male form" in reference to Patrick Bateman and not show what I'm talking about, right?) that wasn't there if Harron is a heterosexual woman. Or maybe it's there as a way to simply subvert the male gaze we're so used to, but I really thought the film had been made by someone who had zero interest slash attraction to the form she was putting on display. Now I have to rework all my thinking about that.

The other thing I learned about America Psycho, which is far less substantial but actually the reason we're even posting about the film today, is that I never knew that the actor that played Luis Carruthers was the one and same Matt Ross that is now known as a movie director - he directed Captain Fantastic with Viggo Mortensen! 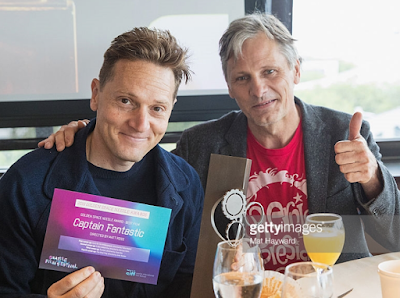