My Time With Timmy

i fucking love you @RealChalamet thank you for being the absolute cutest and sweetest ever ❤️❤️❤️ pic.twitter.com/zlfRXdBwRl
— emma !!! (@troyeshalcyon) December 10, 2017

I was scanning Tumblr yesterday to see if there were any good pictures from the Call Me By Your Name Q&A that Timothee Chalamet did here in NYC this past Friday night (I have some of my own to share in a minute) when I came upon the above images that a fan took with Tim outside the theater after the event, and my eyes noticed something over in the corner... 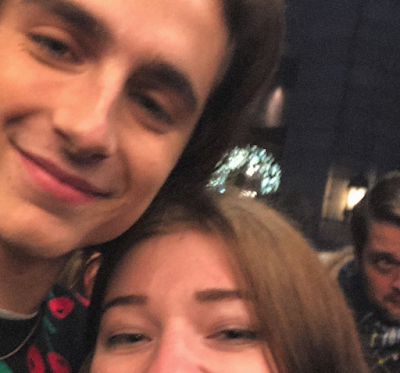 Haha look at that creeper! In case you don't know what your trusty blogger here looks like that's me at the bottom right. I got my picture with him after all! Success!
.

Timothee Chalamet getting mobbed like he’s a Beatle outside the Paris just now #timotheechalamet #callmebyyourname #film
A post shared by Jason Adams (@jasonaadams) on Dec 9, 2017 at 7:15pm PST

.
It was chaos out there so I decided it would be easier to just have him sign the issue of Little White Lies magazine that I'd brought with me rather than to try for a picture, and it was - if you feel the need to see that signed magazine I 'grammed that too because of course I did; what kind of nerd do you take me for.
.
.
I took two videos from the Q&A too - that one above and the second one right here. The video above is right at the start of the Q&A with them talking about what a mad season it's been for him; the second video is a (truly terrible and embarrassing) question from the audience about whether he and Armie discussed what sexual positions Elio & Oliver were using? I guess that's his question? Timmy does the best he can which is to deflect because good grief. 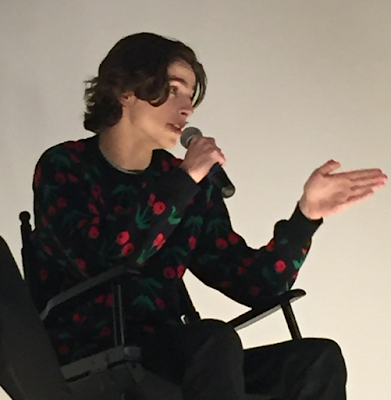 Sorry if I am kind of rushing through this stuff this morning - thanks to the hullabaloo at Port Authority my whole schedule's been thrown out of whack and I'm way behind. (I'm not being cavalier about a scary situation but this is New York, after all.) But hey here's another picture of Timmy to enjoy: 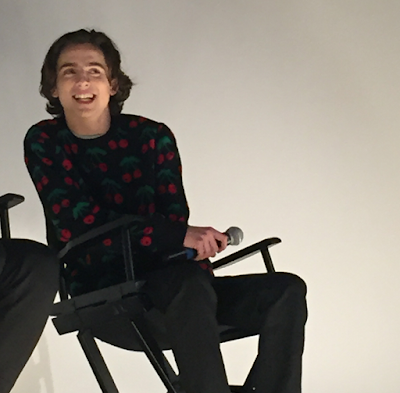 Don't actually know you but I don't think I have had such a good laugh in awhile. Oh god that's great. I am still laughing.