What Comes After Image 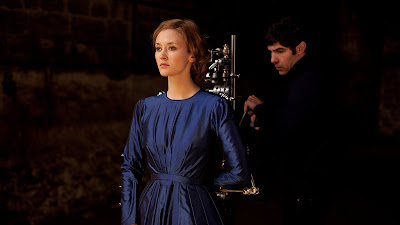 In Kiyoshi Kurosawa's 2001 film Pulse the director twisted George Romero's zombie story into a terrifying technological direction for the new millennia - once there was no more room in Hell the dead rose, but they rose out of their computers, their corrupted souls imprinting upon the real world they'd left behind. They were digital shadows, black spots staining the walls - recollections of Hiroshima were no doubt intentional; Kurosawa saw humanity evaporating around him, the white hot light of our little square screens draining us dry. We were ghosts in plastic shell-casing.

Fifteen years later Kurosawa has returned to a similar terrain with Daguerrotype, only (as the film's title makes plain) instead of looking forward he's now transposing an obsolescent form of technology across the present - perhaps he looks at the anti-email hysterics of Pulse with a cringe of feeling dated today? (He really shouldn't.) But the remove of time, the nigh ancient mechanics of a type of photography that only exists as a fetish object of vintage enthusiasts now, is a fertile place for Gothic Ghostliness, and that's where he plants his feet with this one. And it's spooky!

Daguerrotype is really a double-spin on Vertigo, which given that earlier film's already thick obsession with doubles makes this more of an image of an image of an image of an image - at some point the ectoplasm will wear itself thin and snap, but Kurosawa's a strong enough filmmaker to wring some juice out of this haunted romance yet. It stars Tahar Rahim (already you see why the film works more than it doesn't) as Jean, an aimless young man who's hired to assist a fashion photographer (Olivier Gourmet) who's lost his wife and has become obsessed with photographing his daughter Marie (Constance Rousseau) with a human-sized camera that captures one's essence... perhaps a little too literally.

In order to make these photos Marie must stand still for longer and longer periods of time, strapped into a bizarre metallic support frame, and she begins to fall into trances - she wanders the grounds and hallways of their home in the pseudo-Victorian dresses he outfits her in (all the better to resemble the ghostly imprints of the past), and sometimes she's herself or sometimes she's her mother, and that's even before Jean starts hallucinating things himself...

It's a beautiful film, draped in the heaviest of curtains and mossy paths, a French countryside Rebecca of muddy boots and shadowy basement dark-rooms, stairs climbing towards Heaven itself where anything might suddenly violently appear, or slowly horrifically appear - awful things are always appearing, is my point, while the menfolk stare dumbly, stuck in their own emotional trances. We may be through with the past but the past isn't through with us, as the saying goes, and all our screens, big and small, are personalized invitations to ruin.
.
.
Daguerrotype is out on demand today!
.
Who? Jason Adams When? 3:37 PM