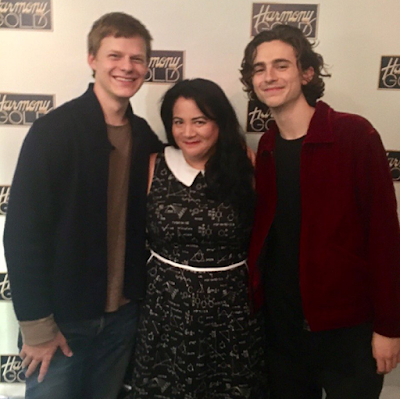 It's weird that there isn't a picture of just Lady Bird's Lucas Hedges & Timothee Chalamet together that I could find, but thanks to Variety's Jenelle Riley for getting that shot. (Although standing there is really her thanks.) Anyway Vulture chatted with Lucas today and found out that he was given the option to play either role of Lady Bird's two suitors when he came on and he says he didn't have the confidence to pull off the one Timothee ended up taking, but...

"They found the perfect person to play Kyle because Timmy,
he’s just so mysterious and stunning and beautiful."
That worked out."

Yes. yes it did. I love their love. Anyway Lucas is wonderful in Lady Bird - I feel like I barely touched upon all the great things about the movie in my review from NYFF. There are so many rich moments and performances - watching it a second time the other day I sat in awe of Lucas (that scene behind the coffee shop!) and Beanie Feldstein (read a wonderful chat with Beanie right here that I keep forgetting to share) and Tracy Letts...
.

We need to stop taking Tracy Letts so for granted though, you guys
— Jason Adams (@JAMNPP) November 5, 2017

.
That is besides the two marvelous lead performances, obviously. Greta Gerwig, you guys. I feel so proud, like a mom who pushed her baby out of the nest - I've been loving her for so long now and she's fulfilling all my hopes and dreams! Yay Greta! 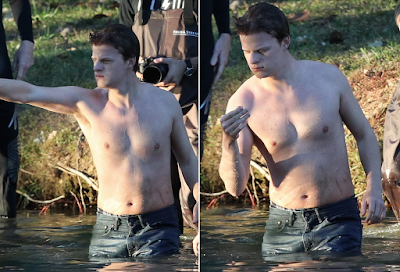 Anyway back to Lucas Hedges for a second. Lucas is currently shooting Boy Erased, the "gay conversion therapy" drama that I told you about awhile back that Joel Edgerton is directing while Russell Crowe and Nicole Kidman are playing Lucas' character's religious parents who decide he's gotta pray slash electrocute the gay away.

That movie was just shooting recently (those pictures of Lucas in the water above are from the set) and he's been hanging out with his co-star, some part-time director named Xavier Dolan... Xavier posted a darker version of that on his Instagram last week (watch it here, although it is dark) which we took immediate notice of. Do you think Xavier and Lucas talk about Timmy? Xavier's always commenting on Timmy's Instagram posts and tweets. What an interesting little clique, hmmmmm....
.

Never felt more in tune with Xavier Dolan than I have these past few days watching him swoon over Timmy’s every Instagram pic.twitter.com/S5foBLfHfh
— Jason Adams (@JAMNPP) October 25, 2017