Do Dump or Marry: Ready To Ragnarok 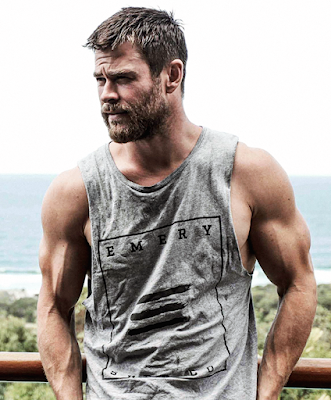 (Hi, Chris. Good grief.) Anyway I've been struggling all week with finding anything meaningful to say about Thor: Ragnarok -- I thought it was a lot of fun, mind you, but my thoughts on it seem to slam against a wall if I attempt to go any further than that. It was fun. It's kind of impossible to write about Marvel Superhero Movies for me at this point - I look forward to them and they entertain me but they're just relentlessly efficient eyeball candy really, and that's that. 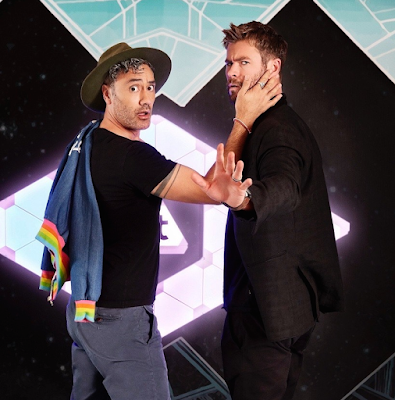 I mean I'm profoundly thankful that Taika Waititi managed to inject a giddy and goofy sense of humor this time around, but it's not really like I care about any of the characters or expect to think much about what happened until the next time I'm sitting in the theater for another chapter.

Props to anybody who can come up meaningful things to say about these movies, in all seriousness. But anyway I figured in lieu of a "review" since I don't have one of those I thought we could instead "Do Dump or Marry" Thor & Hulk & Loki, because hey it's something. So tell me in the comments! And I mean the characters - Thor, The Hulk (as The Hulk, not Bruce Banner) and Loki - not the actors. Take it away!

I'll just have Taika Waititi. He makes me...well, you can imagine!

Do Thor, marry Loki, dump the Hulk. For the actors I'd marry Ruffalo (!), do Hiddleston (repeatedly) and dump Hemsworth.

Do Loki (that bubble butt has a hold on me!!), marry Thor (so I can see him walk around the house naked), and dump Hulk (so I can watch him SMASH lol)

Do Thor, Dump Loki, Marry The Hulk.... What, I like the color green, and chest hair!

How about another Do, Dump & Marry for those 3 cameo appearances of the actors who played Thor, Loki, and Odin in the Asgard play? ;-)

Do The Hulk once (I doubt I could take any more than that, despite my... insatiable nature), dump Loki (because of the whole evil thing, plus the slimy-looking hair), and marry the FUCK out of Thor. He's got THAT body, he's incredibly devoted, and he's hilarious - what more do you need?

I mean....I CAN'T with these Hemsworths. I just can't. They are un-fucking-believable. I'm literally forcing myself NOT to lick my screen.

This one is easy!!

Do the Hulk. That huge hairy chest and big hands make me weak. Yes, I know it's a cartoon.
Dump Loki because Loki. He's evil and ugly.
Marry Thor. I'm not into blonds but he's god, literally.

Were we to go to the actors, I would swap Do and Marry.
Do: Hemsworth cuz you gotta hit that once
Dump: Hiddleston I do NOT understand the attraction to this guy. He does nothing for me.
Marry: Ruffalo. That man is sex on a stick!