This is going to be a very fine awards season pic.twitter.com/5aYx0MveNr
— Jason Adams (@JAMNPP) November 17, 2017

.
Right around this time every year I see the next several months - we now have 107 days until the Oscars happen on March 4th - stretching endlessly before me, with the same conversations about the same movies already played the hell out at this point, and then the shitty things start winning awards (god I dread Dunkirk)... and friends, I do get a little bit glum.

So take a little relief in the fact that we're going to be seeing those two up top on all the red carpets, giggling and sharing knowing glances, for the next 107 days, much like their beloved forebears... 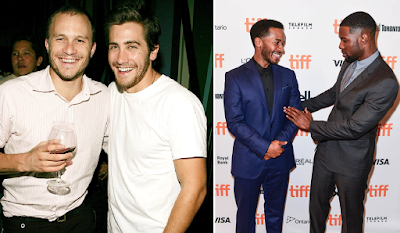 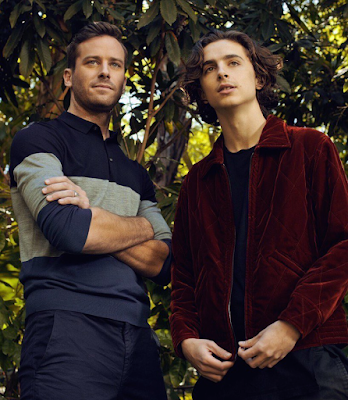 ... Call Me By Your Name is out in one week! ONE WEEK!!! There's a new interview with Luca Guadagnino over at Vulture that's well worth your time... if you care. That is to say I know some of you are tired, oh so tired, of my constant prattling on about this movie, so I'm going to take the passage that I really want to share from this interview after the jump (also because it's spoilery, about sex stuff) so hit it if you want it...
.

Vulture: Some writers have said the film is not explicit enough.
Luca: It’s really something I don’t understand. It’s as if you said there are not enough shots of Shanghai. I don’t understand why there has to be Shanghai in this movie.
Vulture: There is plenty of sex and foreplay and sensuality in it, though the complaint is that we don’t see Oliver and Elio engage in actual intercourse. Did you shoot anything like that?
Luca: We shot some things, but one thing is important to say: We didn’t have any limitations. I also think it may be my unconscious knowledge that many gay films pride themselves on being explicit. It’s almost like a subgenre! Listen, there is a book by William Burroughs called Queer, which I wrote a script for when I was 20. I was completely naïve, although I would love to make that film. That is a movie where you need to see the actual sex because, as per Burroughs’s descriptions, it’s about the war that is excavated inside him: The character Lee is infatuated with Allerten and it devours him. You have to show how the sex and the impossibility of the relationship is informing their behavior, and I agree that a version of that film cannot be shy about the sex. But why this?
Vulture: Do you think Call Me by Your Name is shy about sex?
Luca: There is sperm on the torso [of Oliver], which he wipes off! I don’t know. It is cheap voyeurism, I would say. Because I am a voyeur myself, I pride myself on a more dignified and sophisticated sense of voyeurism than a need to stare at other people’s sexes. 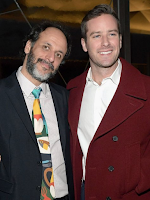 Okay first off I want to see Luca's film of Queer. And second off Luca repeats so many things I've screamed on Twitter here that I am just going to pretend that he's stealing his arguments directly from me. In all seriousness I share Luca's incredulity about this argument - no to overshare (as if that's not all we do here) but at points watching this movie I'm so turned on that it becomes awkward, just sitting.

Speaking of our friend Manuel wrote up a wonderful piece on the film yesterday - click on over here to read it. It gets at the meat of the overwhelming intimacy of watching this thing in really beautifully written ways.

It won't open in Brazil until january =(