Act For Me, Alex 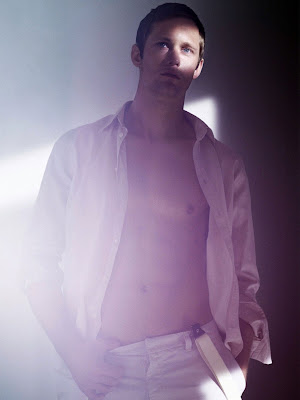 We have a new project to officially be very very very very excited about, y'all! I mean we was already excited - we told you back on the 3rd about Park Chan-wook's next project, that he's making a BBC/AMC television miniseries out of John le Carré book The Little Drummer Girl that will star Lady Macbeth's big up-n-comer Florence Pugh. Well he's just cast the male lead in the thing and it's (you guessed it already, I am guessing, given that great big beautiful picture I have posted) ... Alexander Skarsgard! Park Chan-wook filming Alexander Skarsgard - my knees be weak. (thx Mac)

Alex did pretty well the last time he tried prestige TV, winning an Emmy for getting his erect dick hit with a tennis racquet in Big Little Lies, so I don't blame him for sticking around on the small screen, especially with prestige like this. The small screen has been very good to Alex. Anyway if you want to know more of the plot, here:

"... the six-part miniseries follows brilliant young actress Charlie (Pugh) who strikes up an acquaintance with an intriguing stranger while on holiday in Greece, but it rapidly becomes apparent that his intentions are far from romantic. The man is Becker (Skarsgård), an Israeli intelligence officer, who entangles her in a complex and high stakes plot which unfolds as she takes on the role of a lifetime in the ‘theatre of the real’."