A Hedy of Her Times 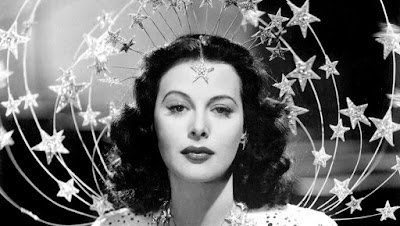 My grandmother loved to draw. She covered everything in doodles - sweet little cartoons of women with 40s up-dos, usually. They looked like the working dames in old movies, the types played by Irene Dunne and Rosalind Russell. Growing up I was always in awe of these little ladies populating the margins of notepads and napkins scattered around my grandma's house in the country - "You should've been an artist," I no doubt said. I'm sure she agreed. But instead Grandma got married at seventeen to a man who beat the hell out of her. She had five kids in rapid succession, moved to a run-down farm in the middle of no place Upstate New York, and she watched her husband go crazy, year after year after year. But she drew.

I thought about my grandmother, not to mention my mother trapped in her own web of impossible possibilities, while watching Alexandra Dean's new documentary Bombshell: The Hedy Lamarr Story - I thought about all the women who've had their gifts and talents, their intelligence and strengths, squeezed from diamonds into coal by the boxes we've violently forced them into. Our, meaning men's, casual incredulity - you should've been this great thing, I said so easily, so offhand, to a woman who'd spent eighty years fighting to just keep her breath. 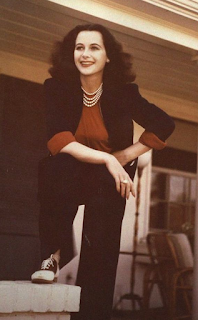 Bombshell is a movie a million years in the making. Bombshell is a hand grenade tossed into our current gas-fire of a situation - it's the movie we need, the story we need, to tell right now. Well it's one of a billion, anyway - Hedy's a good start, a good stand-in, for all the women like my grandmother through the ages who've been devalued and defaced, who've had their accomplishments swiped and crumpled up into the dustbins of history while men's grubby hands pawed them over for good measure, until they were all pawed out.

Hedy Lamarr was a movie star, an inventor, maybe a spy. She was brains, beauty, and balls, and that was at least two and a half too many things for most people. Hedy didn't fit neatly into the world, and so the world grabbed her by the shoulders and wrenched her to and fro until it made her fit, or some horrible approximation anyway. Hedy's time didn't know what to do with her, and eventually she didn't know what to do with herself either.

Bombshell posits that maybe our time finally will. Too late, but not never. I look at those drawings my grandmother etched onto everything now and I feel sad, sure, but I also feel a joy in her talent that echoes out of the past. Perhaps now we can see Hedy and feel some joy too, Bombshell says. Not just in her scientific accomplishments, which it turns out stand significant beside any man's from the 20th century, but her specific story - Hedy fought backwards and in heels and she left a deep lasting mark across the dance floor. So let's dance forward, defiant, and let's do it for her.
.


.
Bombshell it out in theaters on Friday. You can see a Q&A
with director Alexandra Dean at the IFC Center that day too!
.
Who? Jason Adams When? 4:02 PM