.
If you've been to my Twitter today then you know I've been popping over to the set of the new Woody Allen movie (which was shooting around the corner from my office) all day long trying to catch a glimpse of Call Me By Your Name star and new obsession Timothée Chalamet - well as you can see here...
.

HE WAS TOO FAST AND I WASNT READY AND SOMEBODY ELSE GRABBED HIM FOR A PICTURE pic.twitter.com/IWFS59gdbZ
— Jason X Adams (@JAMNPP) October 19, 2017

.
... I did. I caught a quick glimpse! I'm the worst stalker in the world though - I wasn't at all prepared in the fifteen seconds between him popping out of the make-up truck and into the van taking him off and so that's the only picture I managed to take. Oh well. Fun fact: he is pretty tall! Not as tall as me (and not as tall as Armie Hammer of course) but actor-wise, tall.

This is my second time being in Timmy's presence, to my knowledge - see the previous instance here. That was before I saw CMBYN though so I didn't properly recognize the gravity of that situation; if I had I would've gotten a proper picture then, as I had more than enough chance. Someday!

ETA there were paparazzi about capturing this moment better than I managed, so here are a couple of shots from seconds later when Tim had evaded me and climbed into the van (I'm literally a couple of feet to the left outside the frame & so so glad you can't see me): 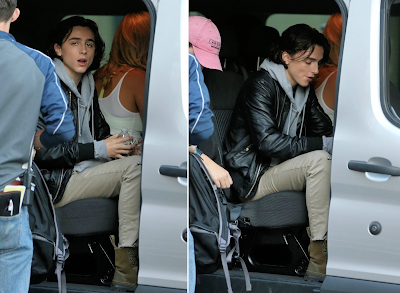 Why the fuck are you supporting child molester Woody Allen? Cause your new twinky fave who is literally half your age is working with him? What is wrong with you?