I'm Not Just the President of the Loser's Club... 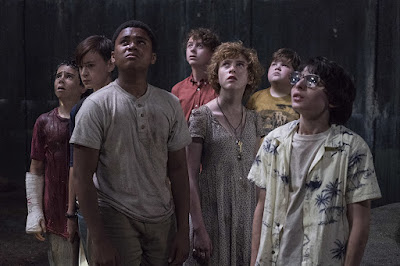 I was born in the year 1977. That means I was 12-years-old in 1989, slapping me right in the center of the new It's timeline. I too had a secret stash of New Kids on the Block memorabilia that I kept hidden in a box in my bedroom. (Jordan was my favorite, obviously.) And like these self-proclaimed Losers (oh that I had the initiative to self-brand myself back then) I had no friends. One day that winter just as I left school, my arms full of books, an older boy pulled my wool hat down over my head and pushed me into traffic.

But I actually didn't get physically bullied too much - an early growth spurt that stuck took care of that. It was emotional violence my classmates wielded. I might've been big but I was gangly, clumsy, and I had terror written all over my every inch. The weird thing is I don't remember anybody bullying me for being gay -  I don't remember the word "Fag" being thrown directly at me once in my life. I certainly wasn't anything but closeted in the deepest darkest terms, but I have no recollection of that being their "in" on me. (And if it had happened I would remember it because I have to this day a mental checklist of all my grudges over all my 40 years.)

No, what they bullied me for was my being poor. I've talked before about how poor we were when I grew up, I don't really feel like deep-diving into that again, but I do want to express what an insidious poisonous ear-worm being bullied for your sneakers being cheap and your haircut being home-grown can be. You stop going out of your room. You stop showering. You start resenting your single mother who isn't working hard enough to buy you these things. You're nasty to her. The air fills thick with resentment.

I didn't read Stephen King's It until I was in high school but those always seemed to be the most knowing passages of the book - the places where nastiness chip chip chips away and the second it breaks through it rushes and crowds in through the little hole like poisonous gas, filling up every corner. An entire town built upon it, that poison leaking up through the sewer grates and sink pipes, whispering evil thoughts in every single person's ears and spreading like an infection, one to another to another, a hard meanness.

I wish that It the movie had gotten that feeling across a little better. The kids are almost to a tee terrific (I did think one of the kid actors was kind of weak, but these are kid actors so I'm not going to name names) and the sequence where Pennywise -- and speaking of mad props to Bill Skarsgard for shuffling his monster out of Tim Curry's honk honk shadow and finding his own space in which to play -- the sequence where he visits and terrorizes each of the kids over the course of a day is pretty expertly deployed - it goes a long way towards shaping how inescapable this Old Evil's influence is in Derry.

And at over two hours long I am sure that extraneous stories had to be sliced down. (And maybe the just announced "Director's Cut" will insert some of this stuff back in.) But the atmosphere lacks for want of them. All of those glorious side-tales that turn It into a 1200 page opus aren't just filler - they are what inform the story's very essence of inter-personal emotional corruption. It's the perversion of "Pay it forward" when what you're paying forward is hatred. That's what makes It resonate - not our culture's trumped-up coulrophobia (which is the pumpkin spice gluten allergy of fad fears).

Still the movie's solid. I loved the abundance of practical effects (that headless monster in the library basement was a trip) and I loved the movie's absence of fear towards seeming goofy - I have seen some shade tossed at the moment where the gigantic Pennywise pops out of the slide projector screen but I absolutely adored that shot; the way his body sproings with a rubberiness straight out of a Wile E. Coyote cartoon gets quick to the twisted heart of that foul creature, putrefying innocence one goofy gag at a time.
.
Who? Jason Adams When? 10:56 AM

the slide projector was one of my fav scenes.

This was a great review. I was looking forward to hearing your thoughts on this and I’m glad you also like it! I’m a bit younger than you (84) but this movie (and first, the book – and yes also the mini series) really resonated with me as a life long member of the loser club. Especially as girl that mostly hung around with the boys as a youth. I swear Richie in this movie represented basically every single boy I had a crush on from elementary school all the way up until… okay now, even still.

I have some quibbles with it, but some of those I think will be laid to rest with part 2. (I especially hope that Mike gets a much, much bigger part as he is the goddamn hero of the entire story, really. He was the keeper of the lighthouse. He was the one that had almost all of the history, even as kids. Bill might have been the “leader” but Mike was what brought them together, completed the circle, helped them put the pieces into place.)

Okay, I’ll get off my soap box now. :) I’m seeing it again tonight, so I look forward to really drinking the whole thing in. Did you check that Janie Bryant was the costume designer? (She, of Mad Men fame) I thought she did a spectacular job. It was 80s without being the clichéd neon legwarmers giant shoulder pads 80s. I swear I could talk about this ding dang movie all day.

That was really powerfully written. Stephen King would be proud. (((hugs)))