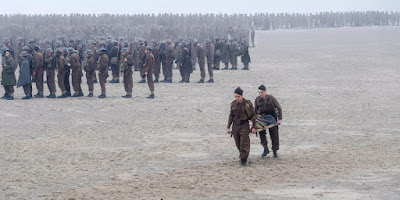 I want to come at Dunkirk from a practical standpoint, because many of my troubles with the film (psst I did not like it) are with the basics of its film-making, which I think it flunks spectacularly. Why Nolan gets celebrated as some wizard of precision I will never fathom when faced with such sloppiness.

So I want you to picture a beach. An empty one. From above. It's basically a rectangle, bisected by a line, right? Where the ocean meets the sand, cutting the whole thing into two smaller rectangles. 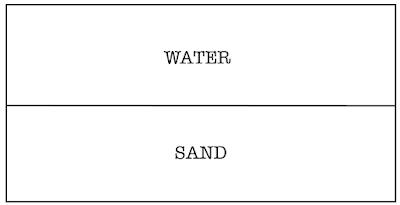 Simple, basic. Now picture a pier. A little line extending from the bottom rectangle, the sand, out into the top, the water. 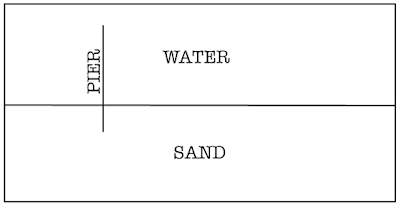 These are simple mathematical structures. Easy science that should be easy for us to follow. Our mind can totally handle squares and lines. It's one plus one stuff - about as straightforward a setting as one can imagine for a movie.

And yet Dunkirk is set on a beach, and Christopher Nolan manages to render this space completely incomprehensible. We are led to the beach from a town overrun by Germans in the film's opening scene. Everything I described being there is there at that point. Sand, water, a pier. The film is entirely about taking all of the characters trapped in this space and evacuating them from it, along that pier, or just out through the water.

Even if Nolan wants to eventually subvert this, you the viewer should still be able to step outside of what's happening and picture inside your brain the actions of the film as a military operation drawn on a chalkboard - a simple rectangle with a big arrow pointing up up and away basically. It should be, you know, comprehensible. 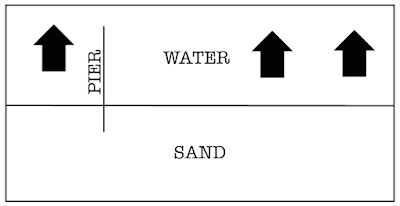 I literally never had a clue where Character A was in relation to Character B in Dunkirk. (Please don't ask me to remember any of those ciphers names.) Where even was that pier? Ships kept sinking (and sinking, and sinking, and sinking - Titanic times ten minus anybody worth caring a whit for) along the coast and yet they never seemed to be a problem or in anyone's way. Perhaps the beach was very long? I'll be damned if I have a clue watching this movie. 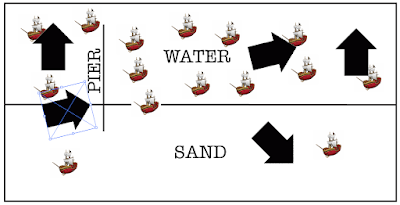 And then add Nolan's favorite crutch of the fractured timeline to the mix, and suddenly that simple rectangle up top becomes a triple decker ham sandwich. 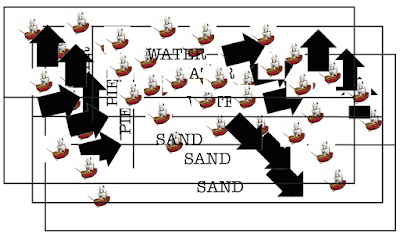 Okay so here is where you say, "But War is Chaos! We're there with the boots on the ground, experiencing the chaos, being swept up in the blah blah blah of it!" Except... no. We're not really. Dunkirk, like all of Nolan's films, is manically structured, edited to hell and back. Just none of the structure means anything, or renders the experience any more interesting - all it does is wave its hands in your face frantically while the score (oof that relentless noise gets to be called a "score" I guess) screams at you that something is totally happening! Happening! Happening! Still happening, I guess...! 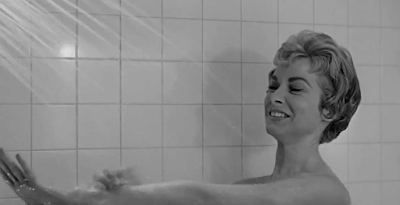 In order to break rules, you have to make some rules first. Take Alfred Hitchcock's Psycho. With its grid-like lines and disrupting diagonals it's fitting. There are what, forty minutes of film before Marion Crane steps into the shower? In this instance Hitchcock establishes character for forty minutes (I know I daren't ask Nolan to establish character, gasp egads) but let's just think of that character-building as rule-building. Hitchcock guides us into this world via Marion, and then she steps into the shower and Hitch slashes the film (not to mention poor Marion) to pieces. The shower itself that she is standing in suddenly breaks in half as a comprehensible space - we are behind her through the wall! 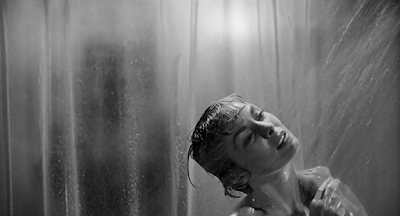 The world is on its head... but only because the world was established. Dunkirk is the shower scene in slow motion stretched over one hundred minutes. Some lady got stabbed, the end.

There are some beautiful images, sure. Not as many beautiful images as people keep crowing about there being to justify the whole "see it on the biggest screen in the world" hysteria but sure. Let's say that it errs on the side of pretty. But it's also gibberish, smoke and childlike scribbles, masquerading as profundity. 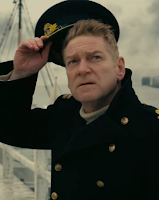 What precisely does Dunkirk tell us about War? I never really felt like I was there experiencing what these kids were experiencing because I never had any idea who these people were or where the hell they were even standing, or even what time it was in relation to anyone else's story. Pausing the cacophony for thirty seconds to let the strings swell while Kenneth Branagh's eyes moisten does not an emotional experience make. I felt no sense of loss or sacrifice because I had nothing in my hands to hold onto. The most pressing concern was whether that one kid ever got to shit or not, and I can tell you - spoiler alert - he did.
.
Who? Jason Adams When? 11:59 AM
Labels: Christopher Nolan, reviews, Tom Hardy

Bless you. I thought I was crazy after seeing the film and feeling so out of sync with the critical world. As if living in Trump world isn't enough cognitive dissonance...

I too have felt the dissonance - that's why I wanted to come at it from the ground up. Nolan's now revered by some as being something he's shown very little proof of being - he has become a terrible filmic storyteller. Just godawful. He is a good technician but he doesn't even get the language of cinema right here.

But there aren't many of us, Tom. Stay strong!

I stand with you both. I have sat dumbfounded through several Nolan movies wondering "What the Hell?" I will never be down with all the worship he receives. BTW, Jason, just an excellent review here (I'm talking form here, not even content).

"I literally never had a clue where Character A was in relation to Character B in Dunkirk. (Please don't ask me to remember any of those ciphers names.)"

This is exactly how I felt about Free Fire once the bullets started flying and it totally ruined my enjoyment of that movie, so I get it. I haven't seen Dunkirk yet, so I can't really comment on that, but I really latched onto this part of this review, and honestly, I'm not too surprised, since Nolan has always had a bit of a strange relationship to space (The Dark Knight, as evidenced by that long-ago video about how the editing makes no spatial sense, is the apex of this).

I hated the bombastic music...it was just too much too loud. The performances were almost indistinguishable from one another...I can't tell if it's Harry Styles or horse-face Jake (even if he were in it). The only thing I admire was the cinematography. The 3 storylines could have been melded into one more seamlessly than it is now which is confusing at times.

One more small thing that highlights your thesis: the opening "crawl". He puts a line of text on the screen and then we get a flash away to something. Then the line reappears with a new additional line of text, we flash away and so on with more lines added each time we return to the text screen after being away from it. It drove me nuts because we are conditioned (or at least I am) to see each return to a text screen as NEW material. Even the third or fourth time, I kept instinctually (even if just for a split second) going back to the TOP of the text, realizing I'd read that line before and then searching back down to what had been added. It's like he doesn't get how the human brain works spatially. Or I'm just crazy. Which is very possible.

I'm with you all. Thanks for the review! It saves me from watching it in full, I'm quitting with the Kenneth Branagh scene, which fell completely flat, because we all knew those ships were coming. I can't understand the near universal praise for this.