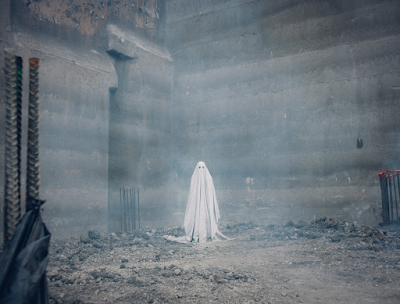 I don't take notes while watching films, even when I know I'm going to review them. I rely on my memory, as riddled with holes from taking too many drugs while I was in college as it is, to whittle down the specifics into a mash of mood and theme, and then I'll talk about that. It usually keeps me from being spoilery, for one, but I'm also not usually concerned with those precise details, the plot and such, when I really want to talk about what a movie did to me.

So I surprised myself when I went digging into my bag 3/4s of the way through David Lowery's new film A Ghost Story - which stars Casey Affleck and Rooney Mara as a couple who wander into the afterlife - to jot down a couple of words, but they got so to the core of what the movie was doing to me that I didn't want to forget them. This is a lot of build-up for what amounts to the Hollywood sales-pitch for the film, but what I wrote down was, "Lost Terrence Malick episode of The Twilight Zone."

That might sound snide or reductionist but one, who wouldn't want to watch the lost Terrence Malick episode of The Twilight Zone? I mean that's sounds amazing! And two, it's the truth, as I see it, and it's anything but those things. While I don't have the time for Malick anymore (I haven't seen one of his films since The Tree of Life grated my nerves into mush) I appreciate the "Heavenly Choir" aspect of his film-making - the search for transcendence through his marriage of sound and image - and what A Ghost Story gets right (well one of the things it gets right, because A Ghost Story gets a whole lot very right indeed) is in its marrying of a spiritual grandiosity - Life and Everything After - with an inherently goofy science-fiction parable. 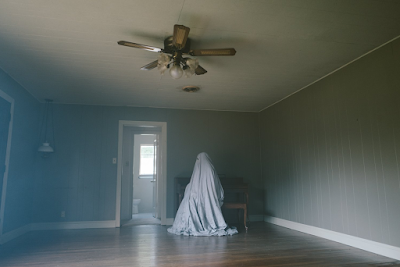 I mean... it's about a man standing around wearing a Charlie Brown Ghost Sheet. Know that going in and prepare your suspension of disbelief accordingly, because if you don't think you even can with that then you maybe can't. The movie does not make tonal concessions for you. A Ghost Story is silly, and mundane, and all the more spectacularly moving and profound for it. I've burst into tears several times in the weeks since watching the movie just thinking back on the sight of a woman eating a pie.

It just aches with loss. There are these edits that allow for the immediate unyielding passage of time, that show the world disappearing in the blink of an eye, that moved me more than anything Malick's gotten at at in his similarly themed meditations on the same subjects, and it's because Lowery gives us a fixed point - a ridiculous ship in the middle of a ridiculous storm. A man in a sheet. And if that's not aimed straight at the heart of what living is then I haven't learned a goddamned thing in my forty years spent spinning on this planet.
.

If you're in NYC you should hit up A GHOST STORE at 51 Chrystie Street for your Ghost Portrait! It's transcendently delicious! #AGhostStory pic.twitter.com/DQCja7eHpQ
— Jason Adams (@JAMNPP) June 24, 2017

Or maybe the film should be avoided like the plague, because the lead is a rapist who should be behind bars for the rest of his days.

I actually don't find the bedsheet ghost thing silly. It brings up too many images of my childhood watching Michael Myers in "Halloween" standing in the doorframe of Lynda's bedroom preparing to send her to the afterlife. The trailer to this movie sort of creeped me out

I loved the film, for all the reasons the review did. And yet I have to agree with the poster who noted that the lead belongs behind bars. He certainly doesn’t belong on film sets;. Casey Affleck has one of the worst reps out there, as a habitual harasser and molester of women; there is also the far more serious allegation of rape. The Mara sisters don’t have to worry about being harassed by the likes of Affleck: they’re Maras, so if acting gets tiresome, there’s always football. Lesser actors, who actually need to make a living doing this, are always the preferred prey of people like Affleck. What a shame such a wonderful film has to spoiled by such a rotten truth.