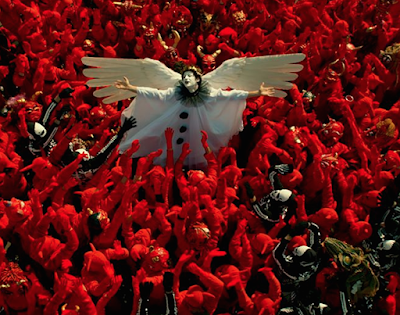 The new film from legendary surrealist Alejandro Jodorowsky, the man behind El Topo and Holy Mountain, is out in theaters tomorrow! It's called Endless Poetry and it's basically a sequel to 2013's The Dance of Reality - even our weirdest artists are caught up in sequel-mania! Anyway Jodorowsky was in town for a very official like "Conversation With" at MoMA last night and it was just me, Daniel Craig and Rachel Weisz, and a bunch of other hangers-on hanging on, no big whoop...
.

Literally a picture of Daniel Craig and Rachel Weisz running away from me #danielcraig #rachelweisz #film #jamesbond #007 #celebrities
A post shared by Jason Adams (@jasonaadams) on Jul 12, 2017 at 6:18pm PDT

... Yes I star-fucked the hell out of Craig & Weiz on Twitter and Instagram last night so you might already know they were there if you follow me. But it wasn't just me! Jodorowsky himself got in on the star-fucking! The "Conversation" part of his "Conversation With" went on for about an hour or so and then Jodorowsky decided to spend the remainder of his time with us giving tarot readings of randomly-chosen audience members, because he's Alejandro fucking Jodorowsky so of course he did.

He told a great story about his first experience with Tarot which involved gay men and flowers pinned to penises, because he's Alejandro fucking Jodorowsky so of course it did, and then he got down to business reading. He read for several people and it was just as strange and surreal an experience as you think it might be, and then he called out for "Hollywood" to come to the stage, and a clearly (delightfully) uncomfortable Daniel Craig sauntered up and had his reading done. I managed to record most of it before my phone died, so watch!
.
.
I have been privilege to a lot of weird things in this city in my 17 years living here, and this one's right the heck up there. Anyway I'll be watching Endless Poetry this weekend, and so should you, and then we can paint our naked bodies blue and gold and roll around expressing our opinions upon it with our genitals come Monday. Sound good?
.
.
Who? Jason Adams When? 11:52 AM