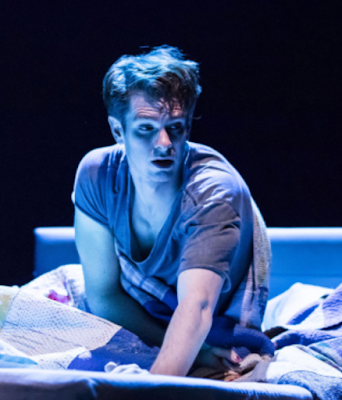 So that Andrew Garfield interview, eh? Unlike some people I'm going to assume we're all adults and we read the actual interview (if not go do that now) and did a just fine job contextualizing it ourselves before we made up our minds (not naming names but I read a fairly arrogant take on the takes on the interview this morning that was working from the point of view that he, the writer himself, was the only person who'd bothered to read the interview and he, the writer, was the only person who had bothered contextualizing it - get a grip, dude... but at least he fired me up to write my own thing, so there's that!) but Andy said a dumb thing, and he should be called out for it. With love, of course.
.

.
He's always been a good ally so I have to desire to drag him but I think it's perfectly appropriate to express exhaustion at his phrasing - whether he meant it that way or not some of us have heard this conflation of "gay culture" with "being gay" a few too many times for our liking.

Heck, the backbone of MNPP is built upon the need to give in my own infinitesimal way a nudging outward of what "gay culture" means - when I started this site 12 years ago there were very few of us writing online about horror movies from a gay perspective. And while my interests have widened over a dozen years, as the daily call for content demands, that's still a fundamental goal in plunking myself down in front of this computer every day.


Of course I'm well aware when it comes to representation online and on-screen I'm doing better as a gay white man than a lot of people - people of color or trans people - and that all it really comes down to for me is a matter of temperament... of hobbies. Likes. But I can only be me so that's what I've aimed for - to make sure that among the fabulosity there's room for the low-talking, the serial-killer-obsessed, the sarcastic, self-conscious, off-putting among us. If glitter gives you an honest-to-god panic-attack then this is your place.
.
Anyway it's fine that Andrew did research and has lot of fabulous homosexuals to hang on to and have fun with (drag performances, whee) as he slips into the brash sheath of Prior Walter in Angels in America, but it's also fine that he gets some push-back when he decides that aping those mannerisms (while explicitly denying the sexual aspect) a homosexual makes. And this isn't about "gay acting" or "straight acting" because I can queen right out with the best of them, hunny - I will just queen out over Patrick Bateman's blood-smeared abs or the nurse getting her head chopped off with gardening shears in The Exorcist III. There's a reason we have a "Queer Creeps" label here at MNPP...

...Vincent Price is our Patron Saint.
.

Between this and Lip Sync Battle, we're one Tobey kerfuffle away from needing to rank Spideys by their gay cred which... please don't.
— Manuel Betancourt (@bmanuel) July 4, 2017

.
Anyway! I got to thinking about all this "gay representation" and "gay culture" stuff (things I try to keep my nose out of, since I don't feel particularly of that world very often, for reasons just explained) this morning alongside the above tweet from MNPP friend Manuel, and a question for everyone - yes, even you! Especially you! - popped to my mind. I want to know...


WHO IS YOUR GAY MOVIE AVATAR?

What movie character already out there in the world (or television, I will open this up to television too) did you identify the most with? I should've asked this during Gay Pride Month but here we are, late like usual. Anyway here is mine:

See this question popped into my head because I realized that the time Tobey Maguire played gay is the most I have ever felt myself represented on-screen. James Leer is a mopey depressive writer who stands in the shadows outside of parties playing with a gun, who knows the details of every single Hollywood suicide, who takes painkillers to watch old movies and slur-sing along with Judy Garland. James Leer makes shit up about his misery and leans into his woe-is-me behavior as a crutch, but he also - as seen through his writing - means well and cares deeply despite all of his posturing. And he's really good at making up stories about strangers at bars. James Leer is me, and I am James Leer. (I just haven't finished my novel yet... so I guess I'm kind of Grady Tripp too.)

The first gay character I remember identifying with was Bobby Phillips watching Wallace in the gym in Lindsay Anderson's "if..."
But I hate to say my avatar is probably more Will Truman, because like him, I'm kind of a straight-acting, uptight dickhead.

Mike Waters (River Phoenix) in Gus Van Sant's, My Own Private Idaho. I think back to that time in the early Nineties and think it's a miracle I'm alive. Way too much misdirected passion.

Tom Cullen's Russell in Weekend spoke to me in a way I don't think any character has before or since.

brian in cabaret - minus the bisexuality but still with a love of liza minnelli and rich, handsome guys who screw you over

The title character in "Maurice," as much for the guilt for being who he is than anything. I came out at 27 after being married twice, so that spoke to me. The other aspect was Maurice being attracted to hot studs like Scudder, who he couldn't carry a conversation on with (but who was admittedly great in the sack), rather than accept the simple beauty of Hugh Grant's Clive. Clive was attractive enough, but more importantly, he and Maurice had things to talk about. But, in my youth, I would have made the mistaken of choosing Rupert Graves any day, just for the way he kissed alone.

This is tough for me. My first thought was of Heath Ledger's Ennis in Brokeback, but I am more a combination of Ennis and Jack (and its why I liked them so much together)than Ennis by himself. But then my mind went to Sal Mineo's Plato in Rebel Without a Cause (though he isn't explicitly gay, he looks at James Dean the way I would). Plato is lonely and isolated, and craves James Dean's attention with a life and death desperation that I very much relate to. He's also bullied and terrified, and has nowhere to run and no one to turn to. I've been that way much of my life as well. So, I guess its him, as sad as that sounds. I hope to have a happier ending though, lol.