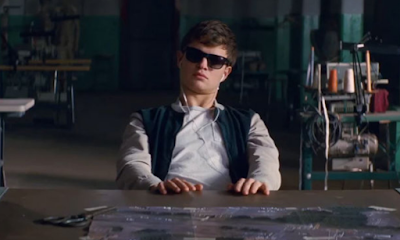 I'm the sad kid waiting for my late ride home after school - I'm the frustrated commuter looking for a taxi during off-duty switch-over hours. I wanna go vroom vroom but I got lead shoes. Edgar Wright's Baby Driver's got some pick up and go to it... so why am I standing here, twiddling my something or other? I don't know. I don't know. I couldn't catch a ride - I think my thumb's broken. Is this thing on?

I'm not all down on Baby Driver - Wright's film-making, the meat of it, is as always ace stuff; snappy and bright and edited to a tee. Sequence after sequence in this sucker sings. And such songs! But the deal is the deal I feared I was dealt going in - I don't jive to this cast. A too high percentage I actively dislike (Foxx and Spacey and Bernthal's faces are what the road to hell is paved with, with any luck) and the other bunch, the Elgorts and the Hamms and the question mark molded into human flesh that is Lily James, I'm mostly indifferent to.

I don't speak attraction-wise, obviously - I'd climb in the backseat with Ansel & Jon any day and get the van a'rockin. (I know we're not supposed to talk about that stuff as Movie Critics anymore, but you'll have to tear my objectifying from my cold dead pants. Christ what a terror, somebody taking me seriously enough to care.) But I don't get much beyond that initial wanna-hump-hump frisson watching those two on-screen. (Yes, even with Mad Men. Lay off, man. It ain't never gonna happen.) And as energizing as Wright's camera trickery and soundtrack pizazz are, I remained basically unmoved from start to black and white finish flag - simply a static observer of pretty things whizzing by at breakneck speeds.

If I was going to pin-point my problem - or a problem, anyway, because it's not so simple as being one thing - some of it could be heaped on the front hood of Baby Driver's weirdly one-sided romance. Who the hell was Lily James' Debora, and why was she supposed to care? She never felt to me more than a prize at the end of the race - a trophy for the best run - and that indifference spread out from there, an infection in the engine, a crack in the wheel-case. Everything outward lurches and spins if the baby's not running proper, and I smelled me a lemon.
.
Who? Jason Adams When? 5:07 PM

Yep, felt totally the same way. Wanted to like it - and there were so many things to like! - but overall ended up indifferent. Plus, I can only handle so many car chases in one movie, no matter how perfectly edited they are.

What a high quality review.

Uh.. what? I don't understand a thing you said besides you don't like the cast for no reason other than you don't like the people themselves but they're attractive.. and you rated this rotten? Why? You're a a movie critic who didn't critique anything.