Thom Yorke is a Witch 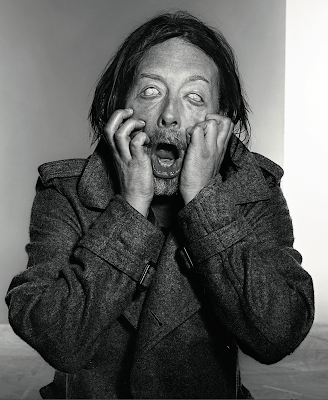 I've been saving that picture of Thom Yorke for the right time and since Thom still has yet to interrupt one of the many many Radiohead concerts that I've been to to propose marriage to me I guess this will have to do... but it does. IT DOES. I'll give announcement duties to our pal Jarett since he's the one who alerted me to the news:
.

.
There's a little more info on the news at Variety, which broke the story. (Although Guadagnino is quoted he doesn't admit that he's doing this because he loves MNPP and wants to make me happy, but I think we all know what's going on here.) Anyway this is the first feature film that Thom will have scored - he did music for a documentary in 2015 called Offshore Incorporated, following his Radiohead partner Jonny Greenwood's massive success in the movie biz scoring all the Paul Thomas Anderson joints.

The original score for Dario Argento's 1977 film Suspiria by the band Goblin is one of the great movie scores of all time, horror or not horror, and so it's smart of Guadagnino to go big. I wonder if they'll attempt to work any of its cues or themes into the new music? Really I just want to hear Thom Yorke scream, "Witch! Witch! Witch!" is all I want, people.
.
.
Who? Jason Adams When? 3:27 PM

I wouldn't mind some Burn the Witch orchestral instrument playing in Suspiria.