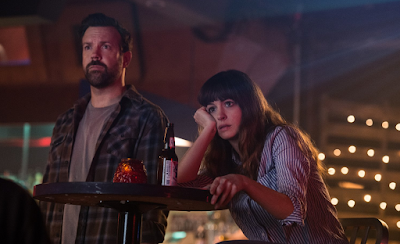 Colossal is as tonally tricky as anything writer-director Nacho Vigalando (who is basically an experimental filmmaker who takes big budget Hollywood concepts and mashes them up in his hands like Play-Doh) has attempted before - for much of its run-time it plays like a failed, unfunny rom-com. It plays as broad as any bad Jennifer Aniston movie at times - the only thing is the punchline keeps being "Jeez this woman is a sad drunk," which isn't a punchline at all.

It takes an adjustment, watching the film - a rearrangement of your audience member particles, of how you've been trained to watch movies like this, to see how Vigalando is subverting those habits. Around halfway through the film there's no going back - I even noticed a change in the theater around me as the movie went on and people began to understand what they were watching. People loosened up - the jokes started revealing themselves not in the punchline but in the moment after the punchline, which is where the movie's true interest lies.

I have a feeling Vigalando is a movie-maker whose time will come like that too - we'll only realize a beat after we should have that this is a master at work.  So now, basically? We should have already realized this, is my point. Every single one of his movies, from the smashing debut of Timecrimes in 2007 up through the strange twists and turns of Extraterrestrial and Open Windows, they need time to bake in your mind, and only now can they maybe be seen as a body of work is it all really coming into focus - his sharp obsessions as a movie-maker, and man are they a fascinating bunch.

Anne Hathaway was a smart choice casting-wise because, well, she's a terrific actress for one. But the baggage she brings with her carries both something like Bride Wars and something like Rachel Getting Married; the latter I think is the key to her work in Colossal - what if in place of Rachel's depressing familial histrionics (no I am not a fan of that movie still) we put those ideas into something far stranger and more fascinating to watch? A genre goof with real emotional stakes plopped down onto it? It makes for a captivating watch; one that has you cheering for the most bizarre things by the end. But cheer you will.
.
Who? Jason Adams When? 10:55 AM
Labels: Anne Hathaway, horror, Jason Sudeikis, Nacho Vigalondo, reviews