The Lyrics of Radiohead's OK Computer 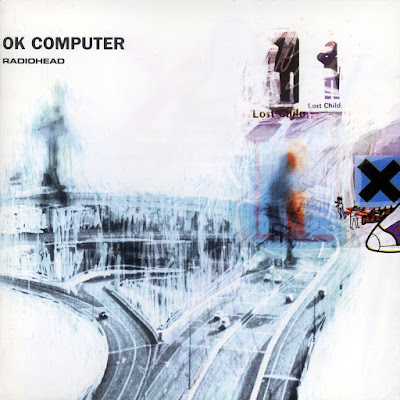 This week Pitchfork is the celebrating the approaching 20th anniversary of Radiohead's album OK Computer, which very well might be my single favorite piece of art produced in my lifetime... I'd say "so far" but I don't know that anything can topple not just the nostalgia the album stirs deep within me, but I don't know if it's even possible to feel as passionately about something as you can feel about something at 19 years old.

So OK Computer was released in the US on July 1st, 1997, when I was a about to be a sophomore (for the second time) in college. I transferred to a new school that fall and lost a year in the process - yes I went to college for five years. (I wish I'd gone for thirty, honestly.) Anyway I made some of the best friends of my life right about then and the first thing they all got to know about me was I was the guy who listened to OK Computer non-stop. NON-STOP. I basically listened to nothing but that album for a year. 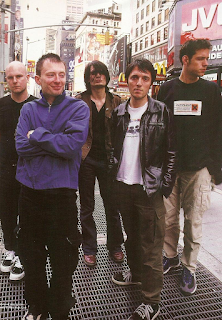 I honestly don't know which came first - the way I now read the world around me or the way this album showed me to view the world around me. I think of I'll be goddamned if it isn't everything through the lens of Thom Yorke's soaring paranoia - when I close my eyes I hear the world through the field of electronic bleeps and bloops that Jonny Greenwood laid before me.

Anyway because Pitchfork inspired me to reminisce on the album and since I never stopped listening to it - it's as familiar as the tips of my fingers by now - I decided it'd be fun to go through the album song by song and as I listen to it choose my favorite line or two of lyrics, as they hit me that moment. (Especially in the wake of several dumb articles I've seen going around complaining about Thom's vague lyrics.) So that's what I'm doing.

"I'm amazed that I survived...
an airbag saved my life."

I doubt I'll be choosing the lyric with the song-title attached every time around but I adore the way Thom sings, "I'm amaaaaayzed that I surviiiiiived..." so it gets the gold star. (Silver goes to "Jackknifed Juggernaut" because come on.) This song's really more about its interstellar sound of guitars shooting off than anything else though.
.
.
Track 2: PARANOID ANDROID

"I'm trying to get some rest
From all the unborn chicken voices in my head."

How do you choose a single lyric from a song so stuffed with spectacular ones? Can you even look around yourself without seeing a "Gucci Little Piggy" on every street corner? I chose this one about the "unborn chicken voices" though because it tickles my sense of the ridiculous and absurd and horrific just right.


I don't know if anybody's ever encapsulated my entire
small town childhood more efficiently than that.

This sweet and terribly sad Romeo & Juliet flavored song ends on a noted of gorgeous sustained bitterness spat out at the world, and for a gay boy feeling very very lonely and unloved, well christ on a cracker did it ring true. And does it continue - whenever I'm feeling put upon this song's my go to.

"One day I'm going to grow wings
A chemical reaction
Hysterical and useless..."

I never could rank favorite Radiohead songs, it'd kill me, straight up murder me dead, but "Let Down"'s easy top five material and listening to it now, it hits these lyrics and I just start crying... I remember that I read Franz Kafka's "Metamorphosis" for the first time right around this exact time though and that story had a profound effect on me too, and the two (this song and that story) are intermingled in my brain pretty deeply.
.
.

"Her Hitler hairdo is making me feel ill"

I do love how sneering and dangerous Thom seems during this song - Radiohead always gets written off as a whiny mopey little band but Thom is often incredibly angry and threatening in his lyrics. "This is what you get when you mess with us." (Jonathan Glazer's video for this song is also maybe my favorite Radiohead music video and it is some straight up Sopranos shit. If you love that video too you should read Pitchfork's oral history of its making - lots of good stuff in there.) But I picked the "Hitler Hairdo" line because it makes me laugh and I think of it every time the people on the news talk about "Hitler Youth haircuts" these days.

I wrote a lot of poetry in college (I wanted to be a poet, because of course I did) and more than probably any other actual proper poet my stuff was all informed by this song (although I should maybe put "song" in quotation marks) right here. All I ever wanted was to write something this evocative and strange and deliciously suffocating. I could've chosen any passage from "Fitter Happier" but I do love these lines' turn on their heels from tears and illness to the surface pleasure of solid tires - it kinda gets to the point super quick.

Jeez does this song feel prescient about Trump's America. I was surprised when I looked at the lyrics how few there are to this song - it's another one that's more about the gorgeous smashing guitar-scapes, I guess. But I do love the way Thom drops down conspiratorially for "your vote" though.

Track 9: CLIMBING UP THE WALLS

If I ever write anything as dreamy and terrifying as
"shut the eyes in the cupboard" I'll retire immediately.
.
.

The rest of this song is a list of suburban horrors and humiliations - "a handshake of carbon monoxide" - but Thom takes us through the home stretch (which is probably the tunnel towards longed-for death honestly) with a lovely image of domestic bliss that always strikes me as profoundly sad and sweet. Claustrophobic drowning never seemed so dreamy.

OK Computer is a cynical and battered and abused album that nonetheless manages to sweep you off your feet at moments and convince you that sometimes ignorance really can be bliss, profound romantic and spiritual (not in the sense of religion, but in the sense of truly awe-some) bliss, and that it's possible to makes yourself believe, for fleeting moments, that everything is pretty and fine. And there is no sound in this world that moves me more than the sound of Thom Yorke soaring right off the edge of the fucking globe with, "It's gonna be a glorious day." His voice makes you believe it very well could be, and that your luck could change too. Like that. Big and beautiful... 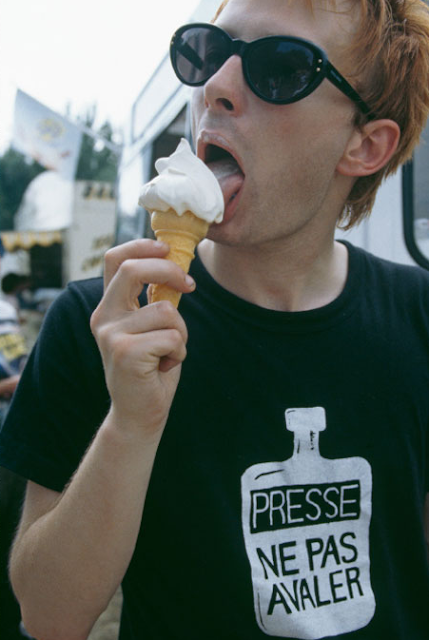 Let Down is my favourite track. And I can still remember going to the mall during summer vacation from high school to go and buy that cd. Even opening it on the bus and searching for lyrics in the sleeve. Oh the 90s

Let Down. Listened to it constantly.