A Pig In A Cage On Antibiotics 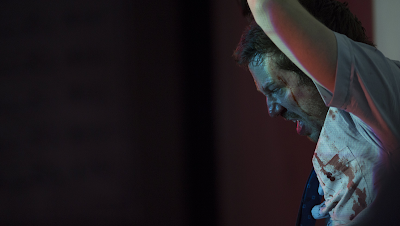 And the stinger is they're right. We live in Trump's America now, and it feels like garbage. I wake up every morning sick to my stomach. I'm touchy on everything - short-tempered, unable to focus, and constantly believing the worst about everybody.

It's been hard, basically impossible, over the past several months not to let my worst instincts take hold. I know that's what nightmares-turned-flesh like Steve Bannon are looking for - they want us hopeless and demoralized. But there's only so many times you can remind yourself of that while simultaneously watching the world turn a blind eye to the bad people doing their bad things gleefully and seemingly repercussion-free before that hopelessness pervades and infects you no matter what you do.

You might know in your heart of hearts that that's the losing strategy. That we need to stand tall and together against such menace. But you're still just an erratic pile of skin cells and neurons like every other person, and weakness comes easy. Easy, and sweet, and every so often you've got to give in to it. There's a freedom in giving up and giving in, don't ya know - that's basically the main tenet of every religion, give or take. If it works for them... ride that river down to Hell, man. Burn it all down with you.

Which is why a movie like The Belko Experiment is vital. If we're in Trump's America now, then this is the movie for these times. The Belko Experiment is rage. It is mean. It is aiming to make you feel bad, convinced as you can be sometimes that people are rotten and the system is rigged and the world is shit, and it's hitting its target like a trained sniper fucking fish up in a barrel. It's a symphony of anger loosed, spraying like intestines from the body. Sweet, sweet release.

It don't play fair, or nice, but what it does do is take all of your bad feelings and give them an outward expression. It grabs them by the fistful and rips them right out of your body, splats 'em against the screen. It's like somebody taking an axe to one of those basement steam-pipes that you always see people taking an axe to in, well, in just these sorts of movies -- it might burn your face off in the meantime but if you don't let that pressure out the whole damned ship is gonna blow, so this is what the ship doctor ordered.

Every piece of art does not need to uplift. Some people don't believe that, and The Belko Experiment is not for those people. It might not be terribly graceful, or terrifically smart, and it has a black rotten heart - it will offend people. Probably more people than it doesn't offend. I state that not as a badge of honor - it's not a dick-measuring contest, and being offended or not offended by this movie (any movie) does not make anyone a better or a worse person. I mean, some people will probably just think it's goofy! It's a movie, and we can get carried away by these things.

But I do believe, sincerely and deeply, that it's art's job to express every human emotion to the best of its abilities - even despair, and even rage. To burrow into the bellies of those like Fred Astaire made pure unadulterated joy just by shaking his feet - it is (sometimes) a horror movie's job to scream, and scream, and scream, for you. The Belko Experiment screamed, and screamed, and screamed, for me, and I felt a catharsis wash over me by the end credits that I hadn't felt in weeks. It wasn't pretty. It wasn't sane. But it sure felt good. That's entertainment.

Girl no one comes to this blog to read your opinions on politics...stick to posting pics of hot muscle boys in various states of undress, thanks

It's a good thing I don't write this blog for anybody but my own damn self then, girl.

Please keep writing about whatever you feel like doing and, I know you dont need me or anybody else telling you, ignore the ignorants and the disrespectful, peace all the best

Speak for yourself, Anonymous I. Guuurrrlll.

Yeah, you do you. Finding where politics and pop culture collide, like you do in this review, is really fascinating.

This is the greatest review of any movie I've read in a good long while, and turned this movie from one where I kinda rolled my eyes at the trailer (in an "Oh, it's THAT movie again" way) into one that I'm kinda interested in seeing.

Anon1. I dig what you're saying in wanting to look at pretty men. You keep doing that. Stay in front of yourcomputer, in your dark room, typing with one hand in shame. Why don't you quiet down and get out of the way while the rest of us fight for your right, OUR right to do that freely in the privacy of our homes, without fear of a trace or reprisal, through wonderful written pieces like this (our man IS first & foremost a critic after all), through videos and mivies of LGBT people, going out in public, protesting, living and loving, knowing that "You're in Trump's America now". Keep your head in the san aAnon1, You may find that that's not a pretty man that wants to screw you (over)!

Truly, people like you make me sick. It's such a shame that you have a platform of readers who consume your twisted garbage. I suppose you believe Bidens America is a shining example of what life should be? Pull your head out of your ASS and realize how corrupt your government is and what luxuries you had under president Trump! Not to mention that your pathetic excuse for a review was full of unrelated nonsense. I promise you, you are not the ultra intelligent, quirky brainiac you thought you were when you wrote this trash. Astounded that you collect any form of income with your brainless ramblings.